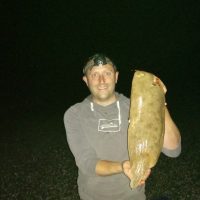 Hello from South Devon! My name is Tom Sheffield and I have been fishing the coastline around this area for the past 16 years. After talking to Sean recently I agreed to become a contributor for Fishing Tails reporting my exploits from this wonderful section of coastline. We are truly blessed in South Devon to be able to fish a huge variety of different types of ground for a myriad of species throughout the year. I personally enjoy catching flatfish and usually have a bait out to target one of the flatfish species during most sessions. My passion in angling involves getting out to different venues and trying various tactics and baits on different states of tide to see what works. This often results in some surprise captures along the way, as you will see from my first report below! I will endeavour to keep you up to date with my fishing trips, give an overview of what is being caught locally and what to realistically target from South Devon in the near future.

My first report below is of a session I had back in the middle of October.

My father has recently retired and in an odd reversal of the usual story he asked me to take him out and start showing him the ropes when it comes to sea fishing. We’ve had a couple of trips together and he is starting to get the hang of casting, baiting up and the general basics, but the previous sessions had been slow affairs with only a couple of fish showing to my rods and nothing for my dad. Keen to find him his first fish I took him out again yesterday to a beautiful venue in the South Hams area of Devon, East Portlemouth. This tidal inlet at the mouth of the Salcombe estuary is made up of golden sandy bays broken by rocky outcrops. There are a huge number of different marks to try all along the waterfront from North to South and a large variety of species available, but the area is famous locally for flatfish (flounder, plaice, dabs, turbot and sole can all be caught here) and thornback rays (the British shore record was caught here). The plan was to fish from low water to the top of the tide from one of the sandy coves near the mouth of the inlet and try to catch a few flatfish. I was certain my dad would run into a school bass at some point during the tide. This original plan was scuppered somewhat by the strong Southerly gusts funnelling through the craggy cliffs that line the estuary mouth, making casting a challenge for the beginner and also bringing with them a lot of weed. I managed a small school bass from this location but it was clear conditions would be too tough to properly enjoy the session, so we upped sticks and trekked down the coast path towards the open sea to a small rock mark. From here we could find a bit of shelter from the wind and also avoid the weed once the tide rose. From our new platform we would be casting onto clean ground, into a decent swell and a bit of tide run. It’s a good spot to find flatfish as they wait to ambush food being dragged over the outer estuary sand bars, which we could still see slightly exposed. We soon had lines in the water again and sat back to enjoy the wall to wall sunshine on yet another surprisingly warm October day. Bites were difficult to distinguish with the breeze buffeting the rod tips but the fish were feeding hard. I was into another school bass almost immediately, quickly followed by a third. They were ravenously taking my blow lugworm baits. Then the highlight of my day came. Having watched my dad bait up and cast out without any assistance (the baiting needle is his new favourite tool), I watched intently as a rattling bite developed on the tip of his rod. He kept looking at me, anxious to wind in to see if he’d got his quarry but I told him to hold fire until I was sure the fish had taken his bait. It wasn’t long to wait and a more positive pull on the rod tip signalled the fish was on and he lifted into the fish without striking hard. He played a superbly healthy school bass to the shore. I was over the moon to have been able to share this moment with him and also to have been there to guide him to that success. His happiness made the day and he was grinning away as he slipped the fish back into the water.

A few more school bass followed and then the bites from them seemed to stop and a slightly different indication of fish activity started to show on my rod tip. I lifted into a fish which fought differently and stayed deeper in the water as it came towards our rocky base camp. It kicked hard as I got it to the surface and I was surprised to find a small gilt-head bream had snaffled my lugworm; the Salcombe area is famous for this species. The British shore record of over 10lb was caught further up the estuary system last year in late October/early November but I had never come across any in my time fishing down close to the mouth. I slipped it back and then over the next hour and a half managed to land 3 more, losing another as it slipped the hook right before landing. The biggest weighed in at 1lb 13oz (picture attached) and was my biggest of any bream species I’ve caught.

These fish fight hard and really punch above their weight. I can see myself having another go at catching these on lighter gear someday. As the sun dipped below the cliffs opposite our location and the light began to fade the bites dropped away. With the last of the dying Autumn sunlight we packed up the gear and made our way home. The flatfish didn’t come out but that was surely down to there being a lot of suspended sand in the water, churned up by the swells rolling up the inlet channel. However, the day had been busy with nearly a fish a cast once we moved location and a memory made to cherish seeing my father catch his first fish. He talked about doing some solo trips as we drove back through the maze of lanes to reach the main roads. I hope to report of more success for him in the future.

I look forward to being a regular contributor and hope you enjoy reading about South Devon’s fishing.

One Response to "South Devon Tails"