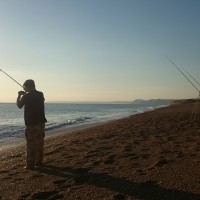 Another weekend of North Easterly wind

Looks like we are set for another weekend of North Easterly winds. Not great news if you are after Cod, but not bad for those looking to get some Bream or Plaice. The North East wind keeps the sea reasonably calm and allows you to get a decent cast. The major downside is that it brings much colder temperatures.

Unseasonable temperature means that the summer species that normally hang around until late October and into November are more likely to move away soon. We have not had a great year for Bream or Trigger fish this year, so the chances of seeing them in a couple of weeks are slim. This didn’t stop Martin McGrath from catching a load of Plaice and a bonus Cod from the western end of Chesil.

She who snoozes looses: I was sent the following tale by Bridget Herniman, that was written by her husband Steve.

To celebrate the completion of the shed build I took Bridget to the beach today. It was lovely and sunny, the sea was calm and the guy in the tackle shop said there would not be much to catch today. We set up and sure enough the man in the shop looked to be correct.

Bridget was slightly enthused to keep trying when I caught a small whiting, but by two o clock she put down her rod, lay on the shingle and declared a snooze time after catching a few crabs. Slightly bored I blasted another bait towards France left the rod in the rest and sneaked over to B’s rod which had a set of mackerel feathers ready to go. Shortly after the feathers hit the sea the rod bent and I could no longer reel in easily. I suspected four plump mackerel but then again the rod felt strange. I shouted to Bridget who wandered over looking non plussed as I battled something on HER rod. I cannot report exactly what she said when I pulled a cod just one ounce short of five pounds onto the beach with a tiny mackerel hook! Grudgingly she congratulated me on a good fish and started to fish again. A few crabs later and my rod twitched and I felt another large fish. This time the Cod was 5lb and 14 ozs.
Bridget said we had to go home.

If anyone lost a load of boat fishing tackle last Sunday in Weymouth, then get in contact with me, as I know who has it in safe keeping. It is a considerable amount of tackle, so someone must have realised that they have lost it.

Appologies for the lack of fresh pictures today, but I decided to update my Mac yesterday and it has hung. Hopefully we will be back up and running again on Monday.

Chesil Beach forecast: Not much more to report from Monday’s forecast. Make the most of the Plaice and Bream still being around. Head to Ferrybridge and Portland end for the Bream.

Plenty of Whiting showing now, especially at night. Ragworm, Squid or small strips of Mackerel will all tempt Whiting. I like to use 2 or 3 hook flapper or clipped down rigs, with size 2 hooks.

There is loads of Garfish on the beach along with some Mackerel.

Portland: I have had a number of Wrasse on soft plastic lures from Chesil Cove and around the Bill. If you want to guarantee a Wrasse then fish hard on the bottom with Ragworm, but expect to lose end tackle.

A few Pollock are showing at dusk, but dawn is still not producing any numbers of them. Lures are always going to produce more than any other tactic.

Portland Harbour: I have had a frustrating few days trying to catch Bass from the harbour. I did hear from the commercial Bass boats, that they were struggling to find the Bass. I had hoped this was because they had moved inshore. It seems that this is not the case. I did manage to get a few takes from Bass, but they were all single hits on surface lures that failed to result in a hook up. I put this down to the fact that there is so much bait fish in the harbour, that the Bass don’t have to work hard to find food.

Weymouth Bay: Still some lovely Thin and Thick Lipped Mullet in the inner harbour. They will also leave the harbours soon, but they are being replaced by Flounders. Not as much fun, but still a species to keep your rod tips rattling.

Preston is another good mark for Flounder and Dabs. There is always the chance of a good Bass, especially if the surf is running

Due to a large number of requests I have freed up a number of additional dates for shore based guiding in the coming 3 months. August to November are by far the best months for fishing, and are normally my busiest times. I will be offering lure and bait fishing for a whole range of species including Bass, Pollock, Rays, Bream, Trigger Fish and Codling.

One Response to "Another weekend of North Easterly wind"