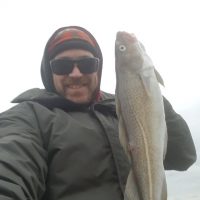 Once again we were battered with another Atlantic gale at the weekend. How come it never seems to blow during the week, then have a lull during the times most of us can fish? It looks like today could be a brilliant day on Chesil. We did have a couple of days this week, where a few lucky anglers were able to take advantage of a break in the weather and head on to Chesil. Bradley Price managed 3 nice Codling as did several other anglers.

Despite such tough conditions the lure fishing for Bass has been on fire. Young Rory Bennett managed this lovely Bass at 4lb 9oz.

Chesil Beach forecast: with the exception of Wednesday, it looks like the beach will be fishable for the most part. Please be very wary of rogue waves. Keep well above the water line.
Conditions today are perfect for Cod. The water is still fairly rough and heavily coloured, but you should be able to cast a good distance. I would expect to see plenty of Whiting, Pout, Dogfish and Conger, with the odd large Ray making an appearance.

Portland Harbour: With building tides and water temperatures still above the 10°C mark, Bass fishing should be very good this week. There are still Garfish around, which will take small lures and float fished Mackerel. Flounders are appearing in better numbers, even if they are smaller than those we often see in Poole.

Portland: As soon as the water starts to clear, the large Wrasse that are still around will be on the feed. Go with hardback velvet swimmer crabs, fished hard on the bottom, for the chance of a specimen fish.

Weymouth Bay: Its going to take a day or so for the water to clear, but once it does, I know a lot of very keen anglers, will be heading out to the piers to try and catch some squid.

Further along the beach towards Bowleaze Cove, you can expect Whiting and decent flounder.

3 Responses to "Another wild weekend"