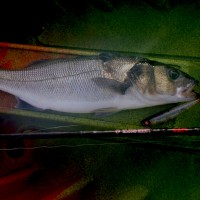 At last, a 42cm Minimum landing size for Bass

At long last the powers that be in Europe have seen fit to agree to increase the Minimum Landing Size(MLS) for Bass to 42cm. The current size limit for most of the UK has been 36cm. At 36cm Bass are still too immature to spawn, so they never even have a chance to increase the stock. Although the commission has agreed to the increase, they have not set a date as to when it will come into force, but if the last changes are anything to go by, then it will be implemented very quickly.

With the additional measures of limiting recreational anglers to 3 fish per day, and a total ban on trawling between January and April, introduced earlier this year, Bass stocks should start to increase over the next few years. This is not something that we will see the benefits of next year, or maybe not even the year after, as the Bass are so slow growing. However the year proceeding that should be much better, and I for one look forward to some great Bass sessions then.

So what on earth has happened to the fishing on Chesil? To say it has been rubbish this week is an understatement. Even the Mackerel that are normally prolific at this time of year don’t seem to be around. So much for my prediction last Friday of exotic fish. It would be nice to see any fish, that is how bad it is. I have only heard of a few Gurnard and the odd Plaice. I fished Portland Bill earlier in the week and I didn’t see any bait fish. Even the little Terns that are nesting at Ferrybridge, are having to fly about a mile offshore to get bait fish.

The water close inshore looks like it is suffering from another Algae bloom, similar to May Water. Looking at it this morning, it does look clearer than it has been all week. My advice to those traveling from afar, is to give it a miss this weekend.

Chesil Beach forecast: With a spring tide upon us, the fresh water coming in from the Atlanatic should push the algae bloom out quite quickly, allowing us to get back to the fishing we would expect at this time of year.

Don’t expect to see many Mackerel, but Gurnard seem to be happy enough to stay around. If the water does clear then expect to see some Plaice and Bream. I think that the sea state will increase to being a bit choppy over the weekend, so the Smoothound wont like that much.

Portland: As there seems to be no bait fish around the Pollock are also staying offshore. However the Wrasse are in plentiful numbers, especially on worm and crab baits.

I am going out this morning to attempt a lure Grand Slam. That is catching Bass, Pollock and Wrasse, all on lures in one day.

I have been continuing to fish for salt water species on the fly, which I am really getting into. I caught this little Corkwing the other day, it is only small, but it is another species that has fallen to my Tubeology System of tube flies.

Portland Harbour: One or two small Bass falling to surface lures around the Harbour, but the big tides should see the number of Bass in the harbour increase. Flounders and Wrasse can be found along Sandsfoot castle area, especially if you cast between the sandy gaps in the reef.

Weymouth Bay: Some good catches have been reported from Stone Pier, with Pollock up to 2lb and some nice Garfish. There are lots of Mullet further up in the harbour, with some monster sized fish amongst the shoals.

SUBSCRIBE
Fishing Skegness for Smoothound The Wall of Articles

9 Responses to "At last, a 42cm Minimum landing size for Bass"