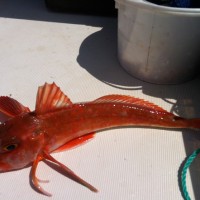 I was lucky enough to be invited out on my friend Fraser’s boat this week. Fraser works abroad in 5 week stints, so the 5 weeks he has off he makes the most of them by going out on his Antares 640 almost every day. The last time he was home I gave him one of my favourite marks to try on the East side of Portland. To say that he has had good sport from this mark is an understatement. He has managed at least 4 different Ray species with several Undulates well into double figures including one at 19lb. Turbot, Cod, Tope and Smoothound.

He had gone out with Mike from Chesil Bait n Tackle earlier in the week and the reports I heard from that trip were fantastic, so you can imagine I was a bit excited by the prospect of a similar session.

We arrived at the boat around 7.45 an headed straight out to Portland Harbour entrance to feather up some Mackerel for bait. Five minutes later and with a dozen Mackerel on board we headed for our chosen mark. After a short steam we anchored up and got the first of the baits over the side. When ever I fish this mark I normally use large baits and this occassion was no different, two squid and a large strip of Mackerel on a 7/0 Pennel rig.

The tide was moving pretty fast and myself and Fraser had to put on a 1lb of lead to hold bottom. Dave who also accompanied us was without the benefit of braid and had to use 2lb of lead. It didn’t take long for the first of the Dogfish to start knocking. we all managed a few Dogfish during this early flurry, but I noticed a better bite on my tip and struck into a solid feeling fish. It definitely felt Ray like and in the current if felt like a decent sized fish. After a short tussle the fish came to the net. I was surprised how small it was, but I was nonetheless pleased as I had just landed my first ever Spotted Ray.

Another flurry of dogfish and I decided that I would go after my target species for the day, a Smoothound. I had even forked out a tenner of Peeler Crab to get them. Whilst I was sat in eager anticipation I noticed out of the corner of my eye a little bite on Fraser’s rod that was not like the normally clumsy Dogfish bites that he had been having. He let the bite develop before striking into a solid weight that started moving off. This was obviously a good Ray. After 10 minutes of fighting it, I decided to try and video the fight as it was nearing its end. Just as the fish was starting to show my reel started screaming, so I hastily put down the camera and grabbed my bucking rod. Now we were into a double hook up with to good fish on at the same time. The Ray doing its normal trick of hanging in the tide and the Smoothound careening all over the place threatening to slice through both lots of braid. Luckily Dave was able to net Fraser’s fish but he didn’t have much time to stand around admiring it as he was on net duty again to get my Smoothound on board. Fraser’s fish turned out to be a lovely Undulate of 16lb, whilst my Common Smoothound topped the scales at just over 7lb.

Things went quite for about half an hour with the odd Dogfish and some Mackerel and even some Launce on feathers. It was about lunchtime by now and in typical fashion the minute you break out your sarnies you get a bite. No great bite, but as we had come to realise that normally is a good sign. Sure enough as soon as I struck into it I could feel the weight of a good fish and with no tide running I had a slightly easier fight. I was delighted as Fraser went to net the fish and announced it was a nice Turbot. Happy days!! We weighed it at 11 1/2lb my first double figure turbot.

The tide started to pick up again so on went the Peeler Crab once more. A few minutes later I had a few rattling bites that I cursed as being a Dogfish snaffling my expensive crab bait. To my surprise I could see a red streak coming up from the depths. Not a Red gurnard but a Tub Gurnard was quickly on the deck. I do love the colours on these fish.

I was surprised that we had landed a Tub Gurnard from this mark. It was at that moment we realised we had dragged the anchor 300m off the mark. As we had already stayed out later than we had planned we decided to call it a day and head home. What a fantastic day. I landed my target species, broke my Turbot PB and landed a new species. In total we had 8 different species, which goes to show why Weymouth and Portland is the one of the best boat fishing places in the country.