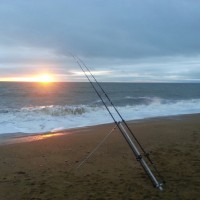 It is going to be a day of disruptions on the site today as I try to get the new look site up ad running.

It seems that Chesil fished pretty much as I expected it to over the weekend. A few Cod were caught, but most of the fish were the normal nuisance fish such as dogfish and Pout. It was a different story around Portland with some fantastic catches of Conger and Bull Huss. I heard of several people that were fishing Chesil Cove and managing to land a 45lb fish. They were getting Conger every 15 minutes on average, with some real big ones lost. January can often produce good numbers of Conger, but the past year has been the best in my memory for Conger from the beach. If I had the time I would take a trip out tonight to target them. It should be possible to get them during the day, as the water is still very coloured.

Take great care if you are fishing around Portland. Do not fish in the area around Blacknor Point, the council have closed the footpath above as it has suffered numerous rock falls.

The water temperature took a big dip last night. This has a two fold effect on the fishing. It normally puts Bass and Wrasse of for a few days until it stabilises again. It also brings Whiting and Rockling in closer.

Portland: Calm with a small swell, the water is  lightly coloured.

Weymouth Bay: Calm with a bit of colour in the water.

Chesil Beach forecast: Still a chance for the odd Cod that will be passing through, but with the sea conditions fairly calm at the moment, I would expect to see more Whiting, Pout and Dogfish, rather than the more desirable Cod and Bass. It is good conditions for Sole and Dabs at the western end of Chesil. I know that a steady stream of Sole have been coming from West Bexington and Cogden. Most falling to small Lugworm baits.

Portland: These big tides are by far my most favoured when fishing the rock marks. It seems to bring the fish a lot closer in to explore food scources that are not normally available to them. It is one of the rare occasions that hard back crabs fish really well. Velvet Swimmer crabs seem to out fish normal shore crabs. Unless you are lure or float fishing, you have to expect high tackle losses when fishing Portland. However the results can be well worth it. The main species at this time of year are large Wrasse, Pollock, Bull Huss and Rockling, with the odd bonus Bass.

Portland Harbour: Flounder and Bass are in the harbour at the moment. Quite a few people have been fishing the harbour over the past few days and some have had good results. I was chatting to one angler called Dave, who fishes the harbour every couple of months, whilst visiting his family. He caught 3 nice flounder whilst I was with him and one of them was almost 2lb in weight. HE was using two hook flapper rigs baited with Ragworm on size 2 hooks.

Weymouth Bay: Lots of Flounder are being caught in the Harbour. Preston has produced Whiting and Pout on night tides, with a few School Bass and Flounders during the day.

Poole Harbour: Some great reports from the Rockley area of Poole harbour. Not just flounder but some very nice Bass amongst them. Ragworm worked slowly across the bottom seems to be finding some decent fish.

Boat & Kayak fishing: Another good day to out on the water. Quite a few of the Weymouth and Poole charter fleet are out and about today. Lots of Bass being caught from the commercial boats around St Albans head. I am looking forward to getting out on the boat next week. If I had a dry suit I would be out on my Kayak trying for some Pollock of the Hood entrance and along the breakwater.

I have organised a half day boat trip for Wednesday morning out of Weymouth on Fearless 2, a fully MCA licensed offshore 105 . Target species will be Cod and Whiting. I like to keep numbers low so that everyone has plenty of room on the boat and has a good session. There is one space left. The cost is  going to be £25 per person and gear is available to hire if you don’t have your own. send me an email if you are interested in a trip.

Fish of the month or week competition! I am going to start running a fish of the month competition and if I can get a sponsor or two interested, I will run a weekly competition. I will release more details of the prizes in the next couple of days. The competition will be for what myself and the sponsor think is the best fish for that period. It may not be the largest fish, as all factors including location and tackle will be taken into account. The fish must have been caught from the waters of Dorset or Devon and have been caught during the period of the competition. You need to email me a picture and give details of where, when and how it was caught. To ensure your secret spots are kept secret I only need to know the rough location so get sending your pictures in now to fish@fishingtails.co.uk

Guiding: Due to the Bass fishing falling off I am only taking bookings for traditional bait fishing sessions for January, I will be targeting Cod, and Whiting from the beach and large Wrasse and Pollock from the shore. I am happy to fit in a few short Pollock and Wrasse lure sessions from the rocks, but these will be limited to 1/2 day or 2 to 3 hour sessions. These can be tailored to your requirements. Drop me an email for more details sean@fishingtails.co.uk