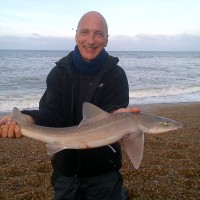 I can not believe we are still being plagued by May water. I know everything has been late this year, but even so, it should have cleared up weeks ago. Just as you think it is ending and the water is clearing, it returns again. Well I guess it is good for the Mackerel stocks as they have not been caught in the usual numbers, but I would love some for the BBQ.

The Mackerel might not be showing properly, but the Smoothound are around in force. I thought my tally of 30 from Chesil last year was good. This year is even better. I have had all of mine on Peeler Crab, but that has not been the only successful bait.

Ian Clark managed  number of Smoothounds like the one above on Lugworm and Squid. Not so many Rays landed this weekend but a good few Plaice came from Abbotsbury.

Chesil Beach: Wavelets and a 1m swell with a fair bit of colour in the water, especially towards West Bexington

Weymouth Bay:  Calm with a slight tinge to the water.

Chesil Beach forecast: Well it looks like no or very few Mackerel again until the May water finally clears, which should be soon. Plenty of Smoothound, Bass, Dabs and Plaice on the beach, with some Bream and Gurnard expected. Towards the Portland end of the beach the water is a bit clearer so it is possible that some mackerel could be found. Wrasse and Pollock are likely to feature as you get close to Chesil Cove.

Portland: The water clarity should not effect the Wrasse fishing has been really good and I expect it to remain so. Lure fishing for Pollock, Mackerel and Garfish around the Bill has been very good, even during the day. As usual dawn and dusk are the best times of day for Pollock fishing.

Portland Harbour: Lots of bait fish in the harbour with plenty of bird activity. I spotted lots of Mullet cruising around the Marina and down in Castletown. Expect Flounders and Bass along Hamm Beach and all the way towards the sailing centre at Castle Cove. They can normally be caught on Ragworm.

Weymouth Bay: The Stone Pier has been a bit quite for the past couple of days. Hopefully now that the water has cleared the fishing will pick up again. The harbour is full of Mullet, mostly Thick Lipped, that can be caught on float fished bread.