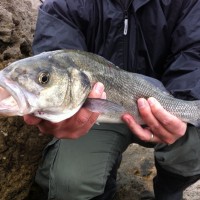 Once again I start the report with the annoying news that the May water has not completely gone. Most areas are clear of it including the Eastern end of Chesil Beach, from Langton Herring to Portland. Unfortunately Abbotsbury, West Bexington, Cogden and the areas further West still have it. Although I did see a few Mackerel caught whilst I was at West Bexington yesterday, I would have expected a lot more at this time of year.

Portland is fishing well as David Nute proves. He sent me an email with a picture of a 4lb Wrasse that he managed to catch at Portland Bill. The fish fell to Ragworm on light tackle. A Wrasse that size is going to give you a great fight on a light sporting rod.

Chesil Beach:Calm with  asmall swell and clear water East of Abbotsbury, but coloured to the west of Abbottsbury.

Chesil Beach forecast: The fishing don at Ferrybridge an towards Portland should be good. Expect Bream, Gurnard, Mackerel, Smoothound and Bass from that area. Add some Pollock and Wrasse as you get further into Chesil Cove. Further to the West at West Bexington and Cogden Plaice, Smoothoud, Bass and Rays should be on the cards. Mackerel will be possible but I would fish the other end of the beach if you want a better chance to get them.

Portland: Wrasse and Pollock are around in good numbers from marks all around Portland. If you want to avoid heavy tackle losses then lure of float fishing will be your best bet. Soft plastics such as Xlayers work well for both species.

Portland Harbour: There should be plenty of Bass and Flounder in the harbour and decent Mullet around Portland Marina.

Weymouth Bay: Weymouth harbour is full of Mullet and a few Bass. Both have been caught on bread, but if you want Bass then Sandeel work well in the harbour.

Whilst we waded  up and down Weymouth beach in the search of the hundreds of Bass, sorry Mullet my mate seen we did disturb loads of Flounder. A lot of them were small, but others were well worth catching. Further along towards Bowleaze Cove you have a good chance of a Bass, Ray or Sole.