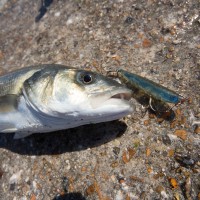 Where can I catch some Mackerel? At last it looks like the May water has gone, even from the western end of Chesil, where it seemed to linger for an eternity. Although the water is lovely and clear, the Mackerel do not seem to want to play ball. Very few have been reported on Chesil. I spent over an hour yesterday driving round trying to find where they might be. I even went up to the top of Portland and looked down in to Chesil Cove.

Although you cant see it in the photo above, the water clarity was so goo I could see several large shoals of Mackerel moving along the beach. The down side was, they all seemed to be around 200m of the beach. I wasn’t able to understand why they didn’t want to move closer to the shore, until I went home and looked at some satellite information that I have been monitoring. I noticed that there was a very distinct band of cooler water at the same distance as the fish seemed to be at. The bait fish it seems are unwilling to move into the warmer water closer to shore (well thats my theory and I am probably wrong). The good news however is that the cooler water seems to have moved away to the West and become more diluted with the warmer water, creating a less dramatic change in temperature. I will be monitoring the satellite information closely in the future to try and help predict better fishing conditions.

The Mackerel were around in good numbers of the Pleasure an Stone Pier in Weymouth. They have also been prolific of the Cobb at Lyme Regis.

I have been lure fishing most of this week with mixed results. When we have expected to struggle in the bright sunshine and calm conditions, we have had fish. At dusk with a high tide, we have had nothing. I guess thats fishing! I will leave you with a picture of  3lb Bass that my mate caught on a Seaspin Pro-Q 90 in bright calm conditions.

Chesil Beach forecast: Looks like a good weekend in store for us with lots of Mackerel, some Bream and Gurnard on the cards. With larger tides I expect to see some large Smoothound and Ray being caught. Ray fishing does seem to be better during darkness, especially at marks like Seaton.

Portland: Plenty of Wrasse and a few Pollock around the Island. The Bass do not seem to be showing on any of the rock marks. Night time sessions can produce large Conger Eel and Bull Huss, especially from Blacknor Point on the West side, and on the East side off Chine.

Portland Harbour: A few Bass are showing in the harbour along with lots of Thin Lipped Mullet. Whilst I was wading along Hamm Beach  I spotted lots of Flounder swimming away. They were very close to the shore.

Weymouth Bay: The Mullet have been keeping plenty of anglers busy in the harbour. Most of them are Thick Lipped Mullet and have been falling to bread.

Further round the Bay, Preston Beach has been fishing very well, with plenty of Bass being caught by lure and fly fishermen. Bait anglers have been catching plenty of Gurnard and Flounder from the same mark.