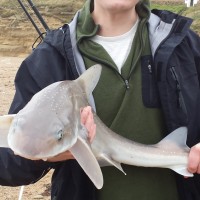 Mackerel Madness!! That is probably the best way to describe the fishing over the past couple of days. I was fishing towards West Bay, when a shoal of Mackerel appeared on the beach. At first I thought it was just a small shoal, but then a huge area of water erupted in to life, as the Mackerel smashed into the bait fish. There was fish as far as the eye could see, the shoal must have easily contained 1/2 million fish. They were driving the bait fish right on to the beach.

What happened next could only be described as mayhem. People suddenly appeared as if from nowhere armed with rods and Mackerel feathers. They barged into every available space with less than a rod length between them. People came running along the beach to chase the largest part of the shoal. Swimmers in the water were screaming hysterically as they were being hit by hundreds of Mackerel. I even witnessed one guy and his son try to catch the fish with a tennis racquet.  I have this on video and I will share it later, once I have edited it. I have included a quick video to try and show how close the fish were to the shore. It is pretty poor quality, but I will see what else I have later.

After 3 hours I left, but the shoal was still on the beach. I could see much larger fish amongst the shoals, pretty sure they were Bass and unbelievably Dogfish, so I tried with a live Joey to target the Bass, but it was impossible due to the sheer number of people casting over my line and snagging my live bait. I have had reports that the same shoal was around Cogden during the morning. One angler used a chunk of Mackerel in close and hooked, what he believes is a Tope (pictures to follow). A bit later he managed a large Conger, all during the day.

I have noticed that the band of cold water that has been sitting around Portland Bill and along the beach as far as Cogden has now gone and been replaced by much warmer water. Despite windier conditions the sea temperature has risen by 1.5 degrees. This is likely been the reason why the Mackerel were not around in the numbers they were last year. Lets hope the fishing really switches on now.

Chesil Beach forecast: If the shoals of Mackerel are still traveling up and down the beach, then fishing should be fun this weekend. The larger predators that feed of the shoals of Mackerel will come in close as well. Bass are never far from the mackerel, but you also get Rays, that come in to feed on the dead and injured fish that are left behind when the shoals get smashed by the larger fish. If you can catch one, then using a live Joey Mackerel is a great way to catch a larger fish. I normally use a Pennel rig with  5/0 or 6/0 hooks. I put one of the hooks through the nose and the other just behind the dorsal fin.

Lots of other fish should be around, especially Bream, Gurnard and Plaice. If you find any bait fish washed up on the beach, hook a few of them onto a 2/0 hook and cast it out. You never know what you might catch.

Portland: Conditions are good for Wrasse fishing from the rock ledges around Portland. I would imagine that it will be very busy around the Bill during the day with swimmers. Night tides will give you a chance of a large Conger, or a Bass or Pollock on Mackerel baits.

Portland Harbour: With smaller tides this weekend, the harbour is less likely to fish as well as it was earlier in the week. You should still be able to pick up Flounder and Mullet, but the Bass always seem to be in larger numbers on the larger tides.

Weymouth Bay: Both piers are fishing well, but they are both very busy with holiday makers. Preston beach is also packed with other beach users during the day, so it is probably a good idea to avoid it. Night tides should produce Gurnard, Flounder, Rays and Smoothound, with the chance of nice Bass close in.

Preston Beach will produce flatfish and the odd Bass. It is a good mark when it is windy like today.