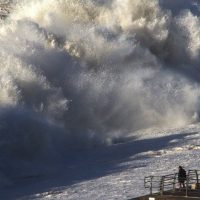 Fishing conditions this week have been brutal to say the least and unfortunately there seems no let up for this weekend, or at least not on Chesil, so if you are in any doubt as to whether the beach is fishable I think you can see from this impressive picture taken this morning by my friend Finn McGuirk, that it isn’t.

For those that are interested, I created a short video a couple of days ago, that is still relevant now.

I was lucky that I did find some Bass in the harbour. Actually I found a lot of Bass in the harbour. They moved around a lot during the tide, but we did seem to be able testy with them, or at least find them again, during the afternoon. Conditions were tough and sometimes it almost felt like we were fishing at night, the clouds and rain made it feel very gloomy, but I loved every minute of it.

It was a great opportunity for me to really put my new Majorcraft Triplecross TCX-902ML/EU, which has been made specifically for the type of lure fishing that seems most prevalent in the UK. It is without a doubt one of the best lure rods I have ever used, and I have used and owned a lot. A full review is on its way.

Portland: 2.5m swell on the West side, that will build over the next two days. The water is coloured

Chesil Beach forecast: Forget it, don’t even think that just because there is a small break in the wind tomorrow, that it will be fishable. This week has seen the highest recorded waves on the beach, all year. With one topping out at 7.5m. I was over the other side of Chesil and I could see waves breaking near the top of the bank. The swell will take a good 24 hours to settle, to a safer height.

Portland Harbour: The tide has died off a bit and that normally means that the Bass fishing will as well. Its still worth giving it a go. Sandsfoot Castle area over low and Hamm Beach over high, would be my top choices.

Portland: The West side will be unfishable, but marks such as Church Ope Cove, can be fished with care. Pollock, Wrasse, Garfish and Bass are all possible. Night tides can produce Conger and Whiting.

Weymouth Bay: Always a safe and reliable mark, when we have SW gales. You can almost guarantee fish from the piers, although they may only be Dogfish and Pout. This time of year normally produces some Whiting and even the odd Cod.