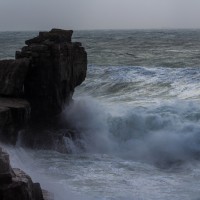 Fishing in a storm

Right now Chesil Beach is on lock down. The storm barriers are closed at Chesil Cove and the beach is being hammered. There is a south westerly storm raging and you still want to go fishing! Welcome to the club. It doesn’t matter how rough it is, if I feel the urge to go fishing (which is often), then fishing I shall go. Obviously with conditions like the ones in the pictures I have taken yesterday you can’t fish a lot of marks.

I am guiding for the next four days, so yesterday I drove around looking for the spots most likely to give me a chance of fish. My client doesn’t like heights so my first choice of Windspit is out. Portland Harbour or Preston Beach are next on my list and most likely where I will end up. However I did look at Church Ope Cove, and despite huge sea’s all around the Cove did look like it could be fished in relative comfort.

The hugh rafts of weed that sometimes end up in there were not present, though this could change later. Waves were around 1.5m, creating a good bit of disturbance to put food into the area, but still allow you to fish. I expect that there will be Bass and possibly Cod in the Cove. You would also have a high chance of a large Bull Huss. Conger will often come out of their lairs during the day in these conditions.

Looking at Windguru, it appears that we will have strong winds all day, but during the early hours of tomorrow morning, the wind will drop and swing to the North West. When this happens Chesil will calm down pretty quickly. The main problem may be the amount of weed that is around on the beach at the moment. I have known that to hang around for a couple of days. I will certainly be looking at the beach first thing tomorrow morning, in the hope that I can take advantage of the fish that will be there feeding. If I can I will post updates on Facebook throughout the day, so if you are not already following me and you want the latest, then click on the link on the top right of the page.

Portland: 4m swell with  coloured and weedy water on the West. The East side away from the Bill is calmer with 2m waves.

Chesil Beach forecast: Too dangerous to fish. Wait for tomorrow.

Portland: The only marks to fish are those well above the water line. Chine is one that can throw up anything in these conditions, including Bass, Bull Huss and Cod. However you will need heavy tackle to compete with the snaggy bottom and the height above water.

Portland Harbour: The area around Ferrybridge and Hamm beach seems to be fishing really well at the moment. Pollock, Wrasse and even some Bass have been caught all this week. This sounds like a promising mark, once Chesil is unfishable.

Weymouth Bay: If you don’t want to risk fishing Chesil, then the Stone Pier is a good safe mark. Lots of small Whitting showing, along with small Black Bream, Wrasse, Pout and Pollock. Float fishing with a strip of Mackerel will still catch you Mackerel and Garfish

2 Responses to "Fishing in a storm"