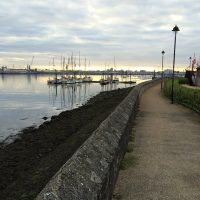 Magazine lane can be found by using the postcode SO40 4UX and once you have arrived at this postcode if you follow the road all the way to the end,you will see a gravel car park to the left of you with a back drop  the containers ships and the docks.

Magazine lane or Maggy lane as some fishermen call it, can be fished by a novice fisherman or the most experienced fishermen, and is favoured when the weather conditions are poor for other venues as it will offer you shelter from a south westerly blow. On arrival you will find two beached sections one at either end of the wall and a walled section with the wall being favourited by my most anglers.

Having been and fished there at low tide and high tide you can get an idea where the best spots are to fish. Once fishing on the wall you will see when tide is on the up or down by the rocks in front you, these are all along the wall and they go out in front of you for about 30 feet. It can be relatively snaggy but by using lead lifts and a continuing reel on retrieval you can overcome this issue.

A lot of people say to use grips weights here but i have found that this adds to the snag so I always use a plain lead which on a bad day I have had to use up to to 6oz’s but at the end of it all, I have never lost any tackle.

Now it comes to the bait selection. Over the years of fishing Maggy lane, I have used every possible bait going but i have found the most productive bait is Ragworm, on a two or three hook flapper. Occasionally I will tip it with squid, which can be a very good choice. However like every venue it’s depends what you are on the hunt for.

The species you are likely to catch down there are Pouting, Whiting,  Dogfish and the occasional Flounder off the beach section. I have also caught Rays, Bass, Eels, Sole and even a Shad from the railings on the walled section.