Fishing Tails > All Articles > Tips > Photography > Fishing Photography: Mobile fishing photography
Everyone must have been on the River Finally the wind is no longer in the East 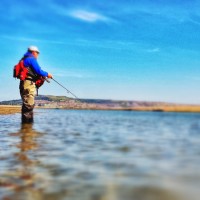 You can’t really expect too much from a mobile phone picture is the current held belief? Well a few years ago I did a test. I took a picture on a £2500 camera and another on a pretty old Blackberry. I then showed them in a talk on how to improve your photography and asked the audience to guess which was which. Over half of them got it wrong. The others I think were lucky and just guessed the right one because you could hardly tell the difference on a projected screen. It highlighted an important fact. It doesn’t matter if you only have a mobile phone on you; if it has a camera, you can get a good picture. Modern phones are great for dramatic panoramas, which look awesome

Within a few years compact camera manufacturers will be going out of business because they mistakenly didn’t put phones in their cameras. Phone manufacturers are doing well because they saw the opportunity of creating one device that does everything needed for today’s visual and social media age. A phone no longer just makes calls, and camera no longer just takes pictures. The public demands multi platform devices where you can share your experiences with family, friends and the world moments after they occurred and give your mum a quick call to tell her you’ll be late for Sunday lunch.

So the humble mobile phone can call, text, photograph, video, email, surf the net, and stay in touch with social media all on the go. So sophisticated are modern devices that you don’t actually need to carry anything else. And that’s why camera companies are going broke because for some reason they failed to see that. However, mobiles do have some issues and you need to work with your device to get the best out of them.

THE MOST FUNDAMENTAL RULE

The first thing everyone should do is clean the lens. 80% of poor pictures are caused by finger marks, dust, grease and salty spray. It only takes a quick wipe and your pictures will be a whole lot better. Remember your phone sits in your pocket and is a device designed to be handled so the lens gets dirty very easily. It is not self cleaning, so that’s the first thing you should do every time you want to use it.

Understanding the camera doesn’t really come into it with a phone. All you need to do is point and press the button. The focus and exposure are taken care of. The only thing you do need to realise is the lens on a mobile camera is fairly wide angle. That means it will distort the image so anything near the camera will look a lot larger than anything in the background: more so than normal. This though works to the fisherman’s advantage, well when they actually make a catch. Because even a smallish fish, if held out nearer the camera will look bigger.

As well as holding the fish out you need to position it well to get a better picture. Just holding the fish sideways or, even worse, straight on, is not going to impress. Hold the fish in a 3/4s position with the head pointed towards the camera. The resulting image will be so much more dramatic.

This is sort of how to hold a fish. It’s a good job it’s fairly large. It could be improved by holding it out in front further.

Light positioning is also crucial. How many times have you thought you’d got a great shot, but all you have is a dark blob in the picture. It’s because the sun is behind the subject and it is in shadow. The solution, if you can, is to turn around and have the sun behind you or at least to the side. In fact side lighting early in the morning or late evening produces some great results.

These two images were taken within moments of each other. One I’m facing the sun, the other has the sun to my back. It’s obvious which one is better.

If you can’t avoid the sun behind your subject then flip on your flash and get as close to your subject as possible. The flash will put some details back and even out the exposure. Failing that some camera phones allow you to press the screen and alter the exposure. So you can expose for the shadow area.

Even if you don’t catch anything you can still take more interesting pictures with a little creativity. In photography the composition of the picture (how it looks) is a rule to make the pictures look better. Is essence you mentally divide the picture area into thirds. Place your subject on any of the lines or an interesting point on where the lines intersect and the image will be a lot more pleasing to the eye. You should avoid putting the subject in the centre of the frame.

The rule of Thirds is an theoretical sectioning of the image into thirds. By placing your subject on a third line or a main part of the image on an intersection point the image will look better.

The off centre approach is always better.

Stepping off piste and breaking the rule of thirds generally creates a much more interesting images as long as you have a decent foreground.

Another tip, which goes for all photography is the angle you take the picture. When photographing a person try to get the camera level with their navel. That way you are looking straight onto them and the picture will look more natural. Standing upright and trying to get the whole person in will mean you are pointing the phone or camera downwards which distorts the image.

If you have a smart phone, such as an iphone or Samsung Galaxy or something like that you have the option of downloading imaging apps. I can only refer to iphones, as I am familiar with the Apple platform.

Two of the most popular and effective imaging apps are Google’s Snapseed and Instagram now owned by Facebook. Both these programmes allow you to manipulate the images to give them a bit more umph. Instagram is a little more user friendly and simplistic, yet Snapseed gives you greater control. Both are free Apps, so download them both and experiment to see which you get on with.

A straight shot with a fairly decent composition.

Using Snapseed the initial image can be enhanced.

Instagram is a less controllable, but still gives great images.

If you are interested in getting more out of photography, be it with a phone, compact, 2/3rds or a DSLR, then I run photography courses and workshops. Please see my website at: http://www.gavinparsons.co.uk/pages/workshops.html for more details. I am also in the process of planning a specific workshop with Sean from Fishing tails to combine both photography and fishing. More details on that shortly.