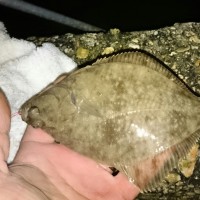 As I mentioned on Friday,  I couldn’t make it to the beach this weekend. But did manage to walk the dog around Baiter on Saturday morning. I met a couple of guys fishing and they had a couple of small flounder between them and confirmed that they are still about. Word is, some still are still being caught full of roe. One can only guess how long this flounder season will continue to last! The beaches around Poole produced the odd good Whiting along with the usual Pout and Dogfish.

After the news of the huge conger caught at Chesil. It’s clear that the large predators are hunting through this fairly mild winter. I’m gonna make it my mission next weekend to head to the Purbecks and see if I too can bag a heavyweight.!!

Then it’s a simple case of a short lob off the rocks into the tackle graveyard. With the rotten bottom the water pressure forces the weight off the hook and the weight is connected to the trace by a weaker line.

Lots have been said about conger baits. I use standard frozen makrel cut in half to produce two baits. One hooked through the cone of the tail and the other half hooked through the head on the next cast.
In my experience the conger bite is very shy just a few short nibbles on the rod tip. When the fish starts to take line (I fish in free spool with the ratchet on). Then its time to engage the reel strike and wind like mad!!
Hopefully you have dragged the conger from its lair,and fighting it in open water. However what normally happens is the conger feels the hook and wraps his tails fast around a rock! If this happens all is not lost, if you give the fish a little slack line and a bit of time the eel normally starts to move off again. The battle commences!!
When the fish is beaten I like to take some photos while the fish is in the water. Then cut the line releasing it.That is if you have access to the waters edge.

I never use a gaff. Stick a gaff anywhere in a conger apart from the lip that’s usually the end of the conger. If you have to get it out of the water, get it in a cloth sack and roll the eel upside down! This will daze the eel long enough for a trophy shot. Then released unharmed to fight another day!!
Good luck as I have found even a 20lb eel is more than a handful on a dark night on an exposed rock ledge.

SUBSCRIBE
Poole harbour not done yet!!! Pollock a plenty!

One Response to "Flounder & Conger"