Fishing Tails > All Articles > Reports > If only I had a better rod – the best £150 you will spend
Tackle shops open from the 15th of June Where are the Mackerel? 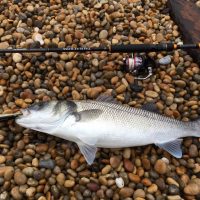 Perhaps you’re new to fishing, or have been doing it for a while and not having as much success as you would like. Maybe you are like hundreds of others  and look in envy at other anglers posting great catches in various Facebook groups and timelines. A lot of these anglers will often proudly mention what rod and reel they are using and you think to yourself “if I buy that set up and must surely catch more fish”. But then another angler catches with a different set up and you are torn about which one to get. Does this sound familiar?

This morning I was reading a post on a Facebook group about someone that had done a fair bit of Pike fishing and was getting into Bass fishing. He commented that he thought his Pike rod was too short and stiff and his reel wasn’t suitable. He was looking for recommendations for a new set up that would cost around £150. This got me thinking about my experiences and so I thought I would let you know the best way for you to spend £150 that will guarantee you catch more fish, but first let me give you a little background.

The picture above is from back in the days when I was learning to catch Bass. I bought a Quantum Exo Pti Reel at a whopping £200, thinking that it would help catch me more fish. This was swiftly followed by another £200 plus purchase of a Century HPR lure rod, that was allegedly the best thing since sliced bread. Unfortunately I quickly realised that I had fallen for the hype and had pretty much wasted a serious amount of my disposable income. The reel was a bag of rubbish that was replaced twice in a year and I just gave up on it in the end. The rod wasn’t much better and left me with a very bad taste in my mouth as far as Century are concerned. That also went back to the manufacturer for replacement and the biggest lesson I learned was that neither particularly helped me catch more fish. Whilst they were being returned, I was using my old savage gear road runner and a cheap Shimano reel, but I was catching loads of Bass because I was learning every day. Luckily at the time I was able to get fishing almost every day, sometimes twice a day. They were almost all short sessions, but I learned so much about the wind and tide and the feeding patterns of the fish, as well as the most important factor and thats watercraft.

The above picture was my best shore caught Bass of 9lb, which was caught on a surface lure and the rod and reel I used to catch it was …….

It doesn’t matter what it was, because that had very little to do with the Bass catches that I have had over the past few years. My best year was probably 5 years ago, when I exceeded 400 lure caught Bass and I don’t count schoolies in my tally. I got those numbers because I put in hundreds if not thousands of hours learning how to fish for them, so what does this have to do with spending a £150 on new tackle to guarantee catching more fish? It doesn’t!

Here is my top tip on how to spend that money. Spend a day with a fishing guide! This isn’t me trying to sell my services, as I rarely guide these days and when I do its for my own reasons and I am very selective of whom I guide. Thats nothing to do with being cocky, it’s that I am heading in another direction with my angling, so I don’t have the time to offer guiding.  When I did guide many anglers that came to me had never caught as much as a schooly Bass before and almost all left catching a Bass or three, but even those rare ones that didn’t went away armed with the knowledge to catch them, just as James one of my first clients with one of several Bass he caught that day.

I will let you into a secret in case you didn’t know this! Fishing magazines over complicate fishing. They have to keep coming up with new material to prevent themselves from being repetitive and as such they create articles that give you tips on how to improve your fishing, by adding things like beads and attractors to your already complex rigs, or glass rattles in your lures and scented attractors. You won’t find a fishing guide coming up with nonsense like that. Most anglers that consistently catch use basic techniques and rigs. Keep it simple and you will catch more fish.

A good guide will set you back between £150 and £200 for a day, but the amount of money they will save you is at least 10 times that amount. They will help prevent you making costly mistakes such as falling for the marketing hype of many tackle manufacturers. You can cut your lure choices down to no more than a dozen lures and by knowing when and where to fish, you will spend your time much more productively.

You get to fast track the where. when and how, by learning from the thousands of hours they have put in to get to a position where they are a reputable guide. Sure you won’t be able to do a virtual download of all their knowledge in one session, but the skills and tips you will learn from them will guarantee to catch you a 100 times more fish than spending £150 on a new set up. A guide will help you with casting techniques, bait or lure choice, the right rig or set up for the conditions and teach you the watercraft that will help you identify fish holding features, in what looks like a featureless expanse of water.

I recommend this not only for sea fishing but for fresh water as well. I have hired guides in the past in different places in the world including a fly fishing guide in New Zealand. He taught me more in one day than I had learned from reading multiple books and hours of YouTube videos. Even now I considering spending  money for a guide in this country to learn to fly fish for course fish. We are never too good to know everything about fishing and I don’t have the time to spend hundreds of hours learning from scratch.

There are some really good guides out there, check out their social media pages and look out for reviews. Shy away from those offering services that are cheap. I am not saying they are no good, but generally if they have the confidence to offer a good guiding service, then they know what they are worth.

I am not saying that you shouldn’t spend money on an expensive rod or reel, or that those set ups won’t eek you out an extra fish or two, especially if the going is tough, but first and foremost invest in learning the craft before you buy another expensive blanking blank.

Over the next few weeks I am going to help you out. I am going to go through some of the basics on lure fishing, including what gear and lures I use and the best times to fish.

SUBSCRIBE
Tackle shops open from the 15th of June Where are the Mackerel?