Fishing Tails > All Articles > Reports > Chesil Beach > Just when I thought it was over.
Bass get some protection – at last! Will those Codling hang on for another weekend? 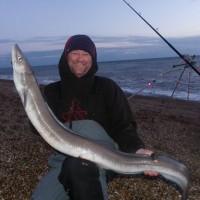 Just when I thought it was over.

I had pretty much written off most of the beach fishing in Dorset for the next 6 weeks. However last weekend proved that it is not quite the case yet. The fishing has certainly quietened down from the beach, with your average angler, struggling to catch much more than a few Pout and Rockling. Plenty of fish were caught in the Samalite match, fished at Abbotsbury on Saturday night including an impressive 14lb Conger and several Codling. But lets be honest, most of the guys that fish the Samalite are not your average angler. Several of them fish at international level, so you can pretty much bet, that if there are fish about these guys will get them. Winners on the night were Dave Bennett, with 23lb 13oz from zone A, and Darren Stevens in zone B, with  25lb 15oz. Darren is pictured below with his 14lb 13oz. Conger and a lovely 2lb Whiting. Also pictures is Dave lane with a couple of nice Codling.

You can click here for more details on the Samalite match league.

I apologise if you were looking for the report on Friday or over the weekend, but I had bubonic plague or some other similar illness that prevented me from having any energy to write it. My wife made some sort of stupid comment about it being nothing more than a cold. I didn’t realise she had suddenly become a qualified doctor 🙂

So lets be honest, with the exception of some Wrasse and Pollock fishing from the rocks, the shore fishing in Dorset is going to be pretty quite this month. We are already eagerly awaiting the the return of the Plaice, which is normally followed a few weeks later by the Mackerel. So what do we do in the mean time? Well one thing for sure is that Fishing Tails team will be pretty busy, and we have been during the last week or so.

We will be brining you a load of tips, reviews and videos over the next couple of weeks. We will also be focusing a lot on fresh water fishing, especially on lures, which is exactly what myself and Adrian were doing last week on the River Stour. Adrian will put up a report later today. We are hoping that the last six weeks of the rivers being open for course fishing, will fill in the time before the Plaice return.

Chesil Beach forecast: As I mentioned earlier, it is going to be a slow few weeks on the beach. The ever present Pout and Dogfish will keep you busy at night, and those capable of a long cast, there is a chance of some Codling, especially towards Abbotsbury. Most of the daylight catches will be made up of small Rockling.

Portland: I am hoping that the Pollock will be around, as we have a couple of high tides coming up that will coincide with dusk. This is by far the best time to catch a Pollock on Portland. I will of course be using lures. As I can no longer get my favourite colour of Metal X Bubble Head, I have a couple of new lures to try out. I will let you know how I get on with them.

The water temperature has really dropped over the past week, so it will be very interesting to see if the Wrasse continue to feed.

Portland Harbour: With most of the Flounder now off to their spawning grounds, there is very little left to fish for in the Harbour.

Weymouth Bay: No matter how poor the fishing gets, you can always rely on Weymouth Piers to produce some fish, even if they are small. I have heard reports that a few anglers are still catching some decent Whiting from the Stone Pier.

Preston beach will produce a few Dabs close in and after dark you will get Whiting and Pout.

Guiding: A new year and some new opportunities. I will be running Cod and Whiting sessions from the shore until at least the end of January. If you fancy a go for a big Wrasse then this is the time to book a guide for those. I will fish for them with both bait and lures. then drop me an email to guiding@fishingtails.co.uk

SUBSCRIBE
Bass get some protection – at last! Will those Codling hang on for another weekend?

4 Responses to "Just when I thought it was over."