Fishing Tails > All Articles > Reports > Chesil Beach > Last of the summer fish
Where are the Cod? The Sprats are in, has this affected the fishing? Pollock, Whiting & big Cod coming from Chesil 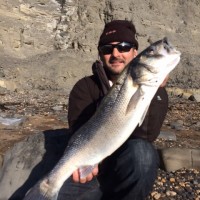 Last of the summer fish

There are still summer species around including Bream, Mackerel and Garfish, but with temperatures falling quite quickly now, this could be the last weekend we will see them. Light winds, fairly clear water and decent tides should make for good fishing conditions.

Although there were not loads of Cod on Chesil this week, they do seem to have been larger than the previous few weeks.  I was fishing at Ferrybridge on Wednesday, and whilst I was walking along the beach, I had a word with a few anglers. It seemed that at 7.30am exactly a shoal of Cod must have moved in, as three of the guys I talked to all had fish of around 7lb.

I know the next bit was posted on the blog earlier in the week, and quite a few have joined me on Google+, I just thought I would leave it up so that anyone that has not seen it can get a chance to read it.

I mentioned the other day that I had  some interesting projects lined up. Not only will I try to do a once a week video forecast, I am going to start using the latest in social media to bring you a regular interactive live broadcast. Don’t get too excited, as I have not got myself my own broadcast studio. Instead I am going to take advantage of some of the features that Google + Hangouts has to offer.  It will allow me to put out a live video stream podcast, and have guests that will be able to answer questions live on their own webcams from an invited list of viewers. As a viewer you can type in questions and hopefully have them answered. I hope to start the first one later next week. All you need to do to view or take part in the live streaming events is create a Google account if you don’t already have one. Once you have done that go to your Google+ page type in my name, Sean McSeveney and add me to one of your circles. I will then reciprocate and add you into one of mine. You will then be sent a message with an invite to any live sessions that I do. Hopefully Adrian will make it simpler for you, by creating a button on here that will link directly to my account. If you miss the live streaming event, you will be able to catch up later with the recording on Youtube.

Chesil Beach forecast: I think it is going to be a great weekend for fishing Chesil. The tides favour the Codling, and I would fish daylight with Peeler Crab. After dark it is going to be full of Pout and Dogfish. Towards Cogden, there have been reports of lots of Whiting, again they have been caught during the day, as well as after dark.

This could be the last chance of getting a Bream. Use much bigger baits than you would in early summer. You would be surprised as to the size of the baits they will take. I like to use the small party squid mounted whole on a 4/0 hook.

Portland: Lure fishing on Portland has been really good this past week. I had a guide on Wednesday and we hit a number of marks on Portland. My client had never had a Pollock on lures before, so he was more than pleased when we stopped counting after 20. Nothing of any great size, but a lot of fun. We also connected into a lot of Garfish and a few Mackerel. Unfortunately the Bass were absent again.

Church Ope Cove and the Bill will produce plenty of Wrasse to bait, with Conger and Bull Huss a good possibility after dark.

Portland Harbour: The harbour has fished consistently over the past couple of weeks.  A few decent Bass have been landed and I have spotted a lot of Garfish that are still around.

Weymouth Bay: I had a quick walk around Weymouth Harbour yesterday, and I was glad to see that there are still Mullet in the harbour. They seem to be Thick Lipped, so bread will be the best bait. The Stone Pier is still producing lots of smaller species, but I have heard that there are some nice size Flounder moving into the harbour.

Preston Beach still has lots of small Bass and Flounder all along it. One or two Sole have been caught there last week, along with Smoothound and Rays.

SUBSCRIBE
Where are the Cod? The Sprats are in, has this affected the fishing? Pollock, Whiting & big Cod coming from Chesil