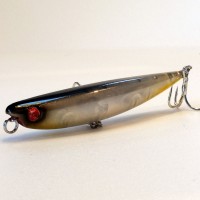 The Pro-Q 90 was my first introduction to Seaspin as a company early in March 2012, Sean had been raving about its big brother the Pro-Q 120 but as I prefer smaller lures for a lot of the fishing I do I decided on the 90. My favorite top water lure at the time was the baby Xorus Patchinko 100 500G which casts superbly, as you would expect from a patchinko,  has a great action and a very effective finish.  I’ve no idea why its called 500g but the clear internal colouring is immune to scratches and the fish seem to like it. I choose 2 colours the Pro-Q 90 in Gor II and the Pro Q 90 in GST  mainly because the were similar to the 500g i.e essentially clear with internal reflective colouring which makes them hard wearing and immune from hook rash!

I must admit I was very skeptical at first and still gave my Patchinko more water time than the much cheaper and unproven newcomer. However over time I began catching fish on it and it became a regular in my A box of lures. Soon after that it became my goto lure  for calm conditions off the top and also proved deadly at night just slowly walked over the water. On  one magical moonlit night session I had 15  on mirror flat  water when the fish were being particularly skittish and only the Pro-Q 90 would do the job.

For a small lure (90mm and 11g) it casts very well indeed although the baby Patchinko probably has a slight edge in this department. Unlike the baby Patch it does not have an internal weight transfer system but it does have 3 small ball bearings to make some noise.

It’s very easy to walk the dog even at dead slow speeds, in fact its so easy I would recommend this lure to anyone who is trying to master this technique! At faster speeds it shoots in a quick curve and dives under the water a few centimeters. A sharper action can induce some spitting and splashing.

“Match the hatch” good advice but can an inanimate piece of plastic really do the job? One night at my favourite after dark venue in Weymouth one bass in particular seemed especially keen to grab my ProQ 90. It had 2 very violent goes at it before hooking itself so badly it came home with me for dinner.

Only when I got it home did I find out why it was especially keen when I found this in in its stomach!

The ProQ-90 showing why fish love them!

Is it any wonder the Bass jumped at my lure?

“Big lures for big fish!”  again generally good advice but this little lure attracts all sorts, just look at this 9lb clunker caught this time last year by Sean and yes it’s a proQ90 in its cavernous mouth!

A quick update in response to the comments below, I took a ProQ-90 piking last week and yes it does work! Second cast this feisty pike had a lunge at my lure. Sorry about the quality of the photo it was very dark!

Due to its sie and weight it does not cast as far as larger lures but it performs very well compared to similar lures.

A fantastic surface lure that gets the job done, it flies well is easy to work and just catches fish.