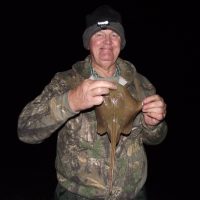 Over the past couple of weeks the fishing has remained pretty hit or miss in the South Devon area. The weather has warmed up which has made things feel more pleasant to be out in. The catch rates haven’t warmed up a lot though. Last time I reported on how scratching techniques seemed to be working reasonably well from the beaches local to me. With no real significant sign that things were improving I have continued along this line of attack, joined once again by family members.

Following up his run of successful trips my dad was certainly up for trying to up his species count and also to try to get a nice sized flounder from the beach. Once again we stayed local to him and chose to fish the Ness Beach in Shaldon. Situated on the opposite side of the Teign Estuary to Teignmouth, Shaldon is a lovely coastal village. There are a few good spots to fish for bass and flounders along the river shoreline, particularly for bass in the raging waters of the river mouth over low water. With strong westerly winds again sweeping down the river we opted to go for the shelter of the Ness. I enjoy fishing the Ness; I caught my first bass from this beach many years ago. Fishing this beach always feels like a real adventure. Its main access point is through a smuggler’s tunnel cut straight through the sandstone cliffs.

The sounds of the wind and surf echo through the tunnel as you make your way down. You never know what you’ll find when you reach daylight at the bottom. On this day I found a very calm sea and not a breath of wind, with the cliffs behind us forming a perfect barrier to all Westerly breezes.

The calm, settled sea looked good to target flatfish from the clean ground in the middle of the beach. The ground becomes more mixed the closer you go to either end. I had an eye on the possibility of a plaice on the sandbanks further out. My dad hoped for flounder in the gulleys closer in. It was perhaps the nicest afternoon we have had all year, almost warm before the sunset. Unfortunately the crabs also felt it was a nice afternoon to be out and were on the feed hard. Nothing was safe from their hungry claws and we endured biteless hours over the top of the tide and into darkness. With that the full moon rose serenely over the sea and shone with all its intensity for the remainder of the session. A friend of ours, Gary, joined us and managed to winkle out a dogfish around dusk. I had a few runs on a large squid bait cast in close for a bass but couldn’t connect with anything. I suspect they were dogfish. Big bass are caught from this beach regularly but more often after an Easterly blow has stirred things up. Smoothounds appear later in the year. The beach does get very busy with tourists through the summer making night fishing and very early mornings the best time to fish. Dad and I suffered a blank but it was enjoyable to be out on an evening that finally felt like spring was here.

That poor result didn’t deter me from trying another beach for my next session. This time I was joined by Roy, my partner’s father. We met up in Sidmouth to fish the Jurassic Coast. With strong westerly winds forecast I picked a location on the main town beach that looked like it would offer some shelter. We both arrived a bit later than we would’ve liked due to the rugby being on the telly. We had our first baits in the water just as dusk was beginning to form a gloom around us.

Two offshore breakwaters protect this area of the beach and the town from the worst of the rough seas. They also provide shelter for many species of fish and a pathway for species to move into the shallower waters. Despite the forecast there was a complete lack of any wind and a nice feel to the air again, no chilly fingers when baiting up. Bites came as soon as the light went from the sky. With a heavy cloud cover it was a dim evening. A few waves were hitting the shore with force and the water was well coloured for some distance out. The first fish ashore was a bass of about a pound on a bait cast at distance on my rod. Roy, using his freshwater outfits, was soon into fish as well. Casting a Wessex rig beyond the breakers a good bite resulted in a small bull huss, certainly a surprise capture from the clean ground in front of us.

This was followed immediately by a slightly larger version. My baits got hit by dogfish soon after. I was pleased to see one as it was the first of the year for me, another species to add to my tally for the year. A solid strike onto Roy’s carp rod resulted in a very spirited scrap from a very chunky dogfish just before high water.

Weighing in at 2lb 5oz it was a very nice specimen from the shore at this time of year. She was safely returned just as a smaller specimen took my bait. It had been an action packed hour over the high water period. As the ebb tide began things went quiet for a while. Roy started packing up and went to refresh baits for one last cast. As he was dealing with one rod his other rod baited with sandeel and ragworms curved over alarmingly. I grabbed it to avoid losing it to the sea. A short fight followed before a shape appeared on the surface in the gloom, a ray.

It wasn’t going to break any records but it was Roy’s first ever small-eyed ray. I was delighted to see another species hit the beach and it was good to learn that they could be targeted from this section of the shore. Hopefully a sign that the corner is being turned in regards to our fishing fortunes. I stayed on another hour into the ebb for another dogfish before calling it a night myself. A much more fortunate evening than the week before and a renewed enthusiasm that things are improving locally. Roy was over the moon to see a number of different species on this session remarking that in sea fishing you really never know what you are going to catch.

Around the coast things have been quiet. A few plaice are showing from East Devon and the South Hams but not in the numbers they were last year. Mackerel and herring are being caught regularly from the deeper waters around Torbay.

I would expect more plaice to show over the coming weeks. Easterly winds are forecast which will kill things for a while. Thornback rays will be worth targeting from the shelter of the South Hams estuaries. Flounders will also be showing later in the month as they return from their offshore spawning grounds. I am hoping to try my hand at course fishing very soon and will hopefully be able to report on a new experience for me!