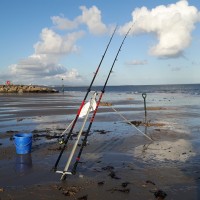 More to fishing than just catching

What a start I have had to the year:

Some of the best bass sessions I’ve known in many years during January.
Some cracking ray fishing through February and into early March.
I really thought I was on for a cracking year then it all ground to an abrupt halt.

On my second session at the bistro (see here for my first), I  took my mate promising a ray session he “wouldn’t forget” He wasn’t going to forget it. We never had a bite between us all night, whilst all around us anglers landed whiting, ray and turbot. Yes he’s not let me forget it either.

This coupled with the fact I have been busy with work (it really does get in the way of my fishing sessions) means my catch rating  has gone from, confident I can land a few fish a session, to can’t even buy a bite! It’s not for want of trying, I’ve fished from further east at Milford to the purbeck rocks after rays and caught nothing! Whilst all around I hear reports that we’re having one of the best years ever for ray fishing.
What was I going to do to turn it all around?
In the last spell of settled weather I had heard of one or two plaice being caught. So this was my banker. My chance to get my confidence back. During the week I kept a close eye on the weather. From Wednesday through to Friday the wind looked like it was dropping with conditions looking nearly perfect on Saturday for plaice fishing. With some fresh ragworms dug on Friday night the plan was to hit sandbanks an hour before low water at teatime catching the last of the ebb fishing through slack water and an hour into the flood.I was working outside all day Saturday and kept a close eye on the wind which stayed a gentle breeze all day! So at 4pm I packed my kit as planned but  as I stepped out of the house to load my kit into the car, a large gust of wind blew down the road.
Looking up to see where it had come from I was greeted with an evil looking black sky. At that point it started pouring with rain. As I drove down to sandbanks I could see white horses building inside the harbour. Though the rain was easing the wind wasn’t!

I should have taken this a sign, but I pushed on regardless, it HAD been settled throughout the week, the conditions WERE near perfect! Surely a little wind and rain couldn’t ruin things in a matter of hours?
I arrived at the beach only to be disappointed! the water was a light chocolate colour and a heavy chop had developed offshore.
I started fishing at 16.30 and from the first cast I had a ton of weed, it’s not unusual to get lots of weed on the bigger tides but this was ridiculous. As it approached low water the weed got heavier and heavier,to the point I lost three sets of gear with my line snapping at the leader under the sheer pressure of all the weight I was dragging in.

Still you got to be “in it to win it” they say! I fished on through the weed hauling huge lumps up to slack water. As slack approached the small bass came on the feed. Not that it really mattered! I didn’t see the bites and I certainly didn’t know I had them on until I had cleared all the line off to find them.

Disheartened I fished on through slack water and on an hour into the flood.

You’ve guessed it weed, weed and more weed. No big red spots. Disappointed was not the word, the fishless run continues.

I can only take heart that all the usual marks are fishing well for ray. Undulates,blondes,small eyed and thornback are all being recorded from Selsey to Chesil.

Turbot are being caught too. Though not huge they are a welcome sight. Southbourne is a good place to catch them use long flowing traces with fish baits like mackerel or blueys.. Plaice are also being caught there. Though nowhere near in the same numbers as last year at sandbanks. But more than is being caught at the moment there. Boats have seen a few plaice caught both inside and outside the harbour in the swash. Like from the beach though the numbers are very weather dependant.

All though I sat fishless all through the tide at sandbanks. The sun did come out and it really was quite pleasant fishing down there. It reminded me of an important lesson for myself. Catching fish or loads of big fish is not the be all and end all for me. I’m old enough to appreciate the views and scenery. I live in beautiful part of the world and to sit sunning myself on the beach in the early evening spring sun surrounded by the purbecks on my right and the expanse of the sandbanks to my left. Life wasn’t too bad

One Response to "More to fishing than just catching"