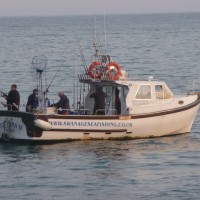 Boat fishing off the Purbeck coast really kicks off in April and May with the arrival of Black Bream and Ray species, and this year was no exception – thank goodness we didn’t have another long bitterly cold spring like last year (which delayed the arrival of many species as the water temperature was very low until June). From late April I had been hearing reports of Bream appearing but I was unfortunately unable to get out on the water due to work commitments. Recently I have managed to get a place on Tom Greasty’s boat ‘San Gina II’ to head out on a 4 hour evening session.

We headed off to St Aldhelm’s Head to try and pick up a few mackerel for bait and a few table fish. In three drifts through the race, we only managed 7 between 10 anglers so Tom turned to boat towards the Bream grounds as we only had less than a couple of hours before slack tide hit. Tides are important as movement is key to successful Bream fishing as these fish are sight feeders. Once on the Bream grounds I opted for a two hook rig with short droppers – I find I connect with more fish with a 8” – 12” snood. I prefer to fish light, using either a 6 – 12lb Greys G-Boat rod, which at 6′ 6” I find a little short, or my 10′ Shimano lure rod. Using these light rods is much more fun than standard 12 – 20lb boat tackle, but I’m not sure how the lure rod would cope if a decent Ray was hooked.

On the first drop my squid bait was immediately hit hard by a fish, after a couple of minutes a hard fighting 2.5 lb Black Bream hit the net. The first 45 mins fishing was great with loads of bites for most on board and a fair few fish landed but as the tide dropped away so did the bites. Gradually reducing the amount of lead to increase movement worked for the next 45 but after that the bites dried up as slack water hit. A switch to a 12 – 20lb rod and on with a larger hook and heavier rig for Rays or a Conger to present a mackerel head attracted some interest, unfortunately by Pouting. One of the other anglers had had the same idea and was rewarded with an Undulate Ray of around 8lbs, followed by losing a heavier fish. After that we were out of time so steamed back towards Swanage, most of us sitting back and enjoying the views along this stunning section of the Jurassic Coast.

Unfortunately the later half of the month saw a few trips cancelled due to strong winds but reports back from those that did go ahead were all pretty good. Next time I head out I’ll be chartering Colin Jarvis, on his boat ‘Sheila’s Promise’, to target Bass, Rays and Conger from the rough ground around St Aldhelms Head. Later in the season I’ll head out again with both Colin and Tom, to focus on one of the conservation success stories of the past few years, and one of my favourite sporting fish that abound in the water off Purbeck, the Tope. If you really want a pull on your line, these fish can fight like hell!

Both skippers run a policy of returning all female Bream during the spawning season, and considering that on just one day last year 70 boats were counted fishing the spawning grounds, this conservation-minded attitude to angling is to be applauded – if we as anglers don’t practice stock conservation how can we complain when commercial pressures reduce fish stocks? So if you want to make the most of local knowledge you can’t go far wrong with these boy’s. You can contact Colin on 07908 171324 or Tom on 07932 557376.