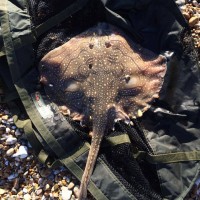 I have noticed over the past couple of years that Ray fishing seems to be getting better and better. Undulate and Blonde Rays in particular seem to be making a remarkable come back, with larger fish being landed all the time, and the number of smaller fish increasing. This is due in no small way to the commercial ban on these species. Undulates like the one caught by Rob Langley, from a West Sussex beach  show that future stocks, if correctly managed will continue to improve.

There were numerous Rays landed on Chesil over the weekend including some decent Thornbacks.

Further to the East in the Solent, the SMoothound and Bream fishing is in full swing. Popular marks such as Pagham and Shoreham have seen some fantastic catches of double figure Smoothound. Weed is one of the biggest problems at both of those marks. I prefer to fish Hillhead for Smoothound, especially over low water. The weed never seems as bad there. I believe we will see some good Smoothound fishing from Chesil this week, especially towards the later part of the week.

Chesil Beach: calm with a milky tinge in the water.

Chesil Beach forecast: Mackerel are still a bit scarce on Chesil, but I am now starting to see signs of Garfish. Plenty of Dogfish and Pout after dark and there seems to be a good chance of a Ray. I prefer to fish for Smoothound during the day. They can be caught all along the beach, but as usual the best baits for them are live Peeler Crab or Hermit. Most of the Bream that have been caught recently have come around Dusk.

Portland: The next few days will see better tides for Pollock fishing. Early morning starts will get you into some nice Pollock on lures or float fished Mackerel strip. The advantage of lures is you can cover a lot more water in a shorter time than you can whilst float fishing. Church Ope Cove will be good for Wrasse and Pollock. It has been known to produce some nice Smoothound as well, especially in the evening.

Portland Harbour: With larger tides this week, the harbour will once again fill up with Bass and Flounder. They can be caught all along the shore in the harbour, but areas like Sandsfoot can be a bit more productive then others.

Weymouth Bay: Some nice Mullet showing in the Harbour. The Thin lipped Mullet are further in the harbour around the angling club and the sluice gates. The piers are producing lots of different species. I had a look down on the Stone Pier yesterday at low water. I spotted thousands of little Sandeels. That will bring in all the predators including Bass, Mackerel, Pollock and Garfish.

Lyme Regis: Wrasse and SMoothound from Monmouth Beach, with Mackerel coming from the Cobb. If you fancy a try at the Mullet then have a go in the harbour, as there seems to be plenty in there.

Boat & Kayak fishing: It was a little bumpy out on the sea for small boats yesterday. I didn’t see too many out, but all of the Weymouth charter fleet managed to get out. It is nice to see that the Tope are now back in the area, as Shaun Tanner found out whilst fishing on Al’s Spirit.

I will do a full boat report later in the week.