Still pursuing my hunch that small eyed rays might be caught in numbers at Southbourne, I decided to have another bash at the bistro to see if I could make it come true. Setting up two rods with pulley pennel rigs baited with frozen Sandeel. I blasted two baits hopefully somewhere near the gully that runs parallel with the beach about 120 yards out.Ten minutes into the flood on my first cast my hunch paid off as I slid a nice small eyed ray of about 5lb up the beach. 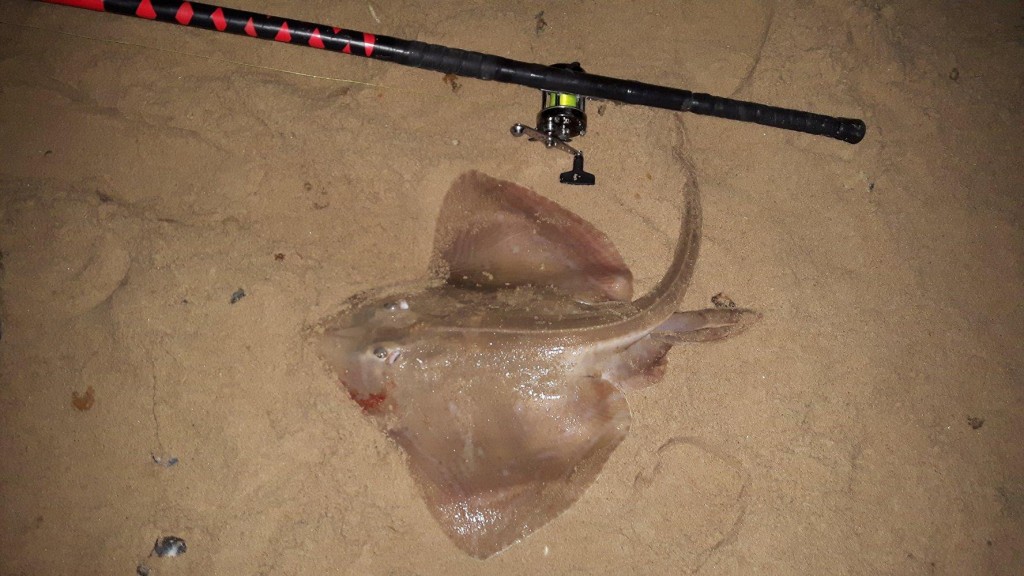 After a few snaps, the relevant pictures and information went straight onto Facebook. Wow was surprised by the feedback!
The main question more than how or when,it was where?
I will adopt the fishing tails motto and try to answer all of these questions accordingly!

HOW: I’m no different than anybody else. I trawl the Internet looking for relevant scraps of information or clues that may give me an idea as to what’s been caught out there. What venue is fishing best? Myself I tried to put two and two together and came up with this assumption.
We’ve had one of the mildest winters in a very long time coupled with that, there have been many reports mainly on social media that lots of undulate rays have been caught recently, from Chesil beach to Milford shingle bank.

Would these same conditions apply to the small eyed ray?

Only one way to find out. Get out there and have a go!

There is only one bait I use for small eyes and that’s frozen Sandeel. Yes they can be caught on other baits. But for some reason this time of year they mainly take Sandeel. Mounted on a pulley pennel rigs with Aberdeen style 3/0 hooks. I usually whip the Sandeel on with bait elastic for those big casts.

WHEN: I have found the best results come at night and from personal experience I know that the small eyed ray show up around march/april for a couple of months. This year as I have stated it has been a lot earlier at Southbourne. The blonde rays have also made an appearance and seeing as I was catching blonde rays all through last summer and on into autumn, that suggests to me that they hang around a lot longer.

Where: The big question!! Where exactly can I turn up and guarantee catch rays on Southbourne beach?
I like to fish the bistro for the best reason I can think of i.e. it’s worked for me in the past! Last year I fancied a change from sandbanks and having heard that ray can be caught at Southbourne  I turned up at a mark called the bistro. Whilst waiting for dark I blasted a fish bait out and caught a half decent blonde ray. For me after that it was a case of go with what you know!
I touched on this last summer. All of Southbourne beach is much the same all along its length. From Heingesbury head to Boscombe pier it’s a sandy beach with a gulley at the end of the groyne and another gulley or sandbank approximately 120 yards out. If you can hit this gulley traditionally this is where you will find the ray. Ben Carter proved this fishing a mark closer to Boscombe pier on Thursday night landing two nice small eyed ray.

Going back to my original story! I landed a ray one on my first cast . Then that was it for the rest of the night. Never even had another bite. Not another sniff of another ray. Better catches had been made during the week. I can only assuming the tide wasn’t running as hard as we approach the neap tides later this week.
C’est la vie’!

After the massive season of last year, the big question on everybody’s lips at the moment is where are the plaice?
The easiest answer would be – Patience!

Last year we had fairly settled weather through February and on through into March and April. So far this year it has been windy with small windows in the weather. This has not been enough time for the sea to settle. Good weather alongside clear water are ideal plaice conditions. Walking the dog this afternoon at sandbanks. The wind had got up and the water was the colour of chocolate. As soon as we see a prolonged period of settled weather with zero wind, the plaice will show in force.

There has not been much focus on the harbour recently which is a shame as flounder are still being caught in numbers! That said ,I think we’ve seen the best of the flounder fishing this year and as the plaice fishing gathers momentum in the warming spring sun. The winter flounder fishing will soon be a forgotten memory.

2 Responses to "Rays from Southbourne beach"