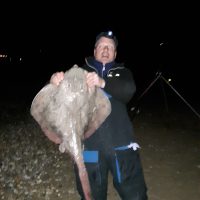 After the the last few weeks of no fish my confidence was at an all time low.
I hoped a trip to to Southbourne might help and although I was dubious I set plans to fish on Saturday  night at  a mark a little further towards Boscombe pier than my usual spot.
With Sandeel and mackerel baits sorted all I needed was some worm bait. Looking at the tide book things didn’t bode well as I thought the tide wouldn’t go out as far as I would like to dig enough worms for my fishing session.

I have often written that  sometimes it only takes a small sign or something to fall into place to boost your confidence.
I arrived at the beach to find the lug beds high and dry. Maybe it was the high pressure system pushing the tide out a little further,, whatever the reason it doesn’t matter as I was surrounded by thousands of lug cast’s.
Normally it’s generally hard work bait digging but the lugworm were virtually throwing themselves into the bucket. After twenty minutes I had dug enough to last me and Martin all night. Was this the sign i had been looking for.

Things were definitely on the up.

Arriving at Southbourne at 5pm I set up three rods. one with a big mackerel fillet, one set up for turbot and one with worm for plaice. Opening my tackle box I found I had forgotten my bag containing all my weights.”GREAT” what a way to start, so much for things looking good. Luckily Martin had enough weights for both of us and all our rods were cast out with earnest!

Within minutes my worm bait showed interest, after a short time I reeled in a plump little plaice. Martin followed this with a baby smoothhound and then I had a small blonde on the turbot rig.”Wow!!” I thought. We’ve only been here two minutes and we’re straight into fish.

“NO”  that was it. The kiss of death!! not another bite until just after around 8pm on high water I landed a baby small eyed ray.
OK ! I thought to myself. We’ve had a few smaller fish, done what we had set out to do. Confidence was restored a little. All I need to is sit back and enjoy the rest of the evening.

Little did I know what was coming!

Around 9pm Martin had a solid bite that he leant into,  after a dogged scrap he landed a blonde ray. At around 5or 6lb it was one of the biggest I’ve seen at Southbourne for a while. I was made up for him as it was a good fish but I was feeling slightly let down as I had put so much time and effort into fishing lately and I still hadn’t had much to show for my efforts.

Time o change up leaving the turbot rig out I reeled in the other two rods set them up with launce on very long pulley rigs and blasted them as far as I could get them. Up the beach I could see two anglers in the process of landing a fish so I went over to have a look. Whilst talking to Southbourne fishing regulars Justin and his girlfriend who had just landed another doggie I heard a whistle from Martin.

Running down the beach I could see one of my rods nodding as a fish peeled off line on the ratchet. I engaged the reel but didn’t strike  I just leant into the fish., the rod just started bend over and over. Whatever it was just dug in. Gently I started pumping the fish to shore, It was heavy ,very heavy! Eventually with Martin waiting at the water’s edge we got to the shock leader that was when it woke up! It tore off and headed our to sea! With a light clutch and a stroke of luck I managed to gain back the line and beach a large undulate ray. It was “huge” Not in width but thick nearly 3 inches thick in the body. After a few snaps I weighed the fish on my old scales at 15lb dead. “Fantastic” I thought! At this point the angler up the beach Justin Taylor offered to weigh the ray in his sling and electronic scales.

At 16lb 8oz I was over the moon. By far my biggest undulate to date.
It just goes to show, keep at it,and sometimes you get the rewards! I would like to say that was the start of an event better night but things died off after that. Not that we were worried as both Martin and I had both hit personal bests and my confidence was well and truly restored.

If this spell of good weather carries on. We may see a few plaice from sandbanks. Southbourne has the potential to produce anything now!
Once again I cannot believe the fishing the fishing we are experiencing in this area and use only April!