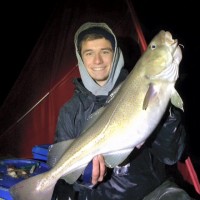 After reporting on Friday that Chesil was fishing unusually well for February, a number of you travelled to find out for yourself and what a great weekend it turned out for some, for others a rogue wave wreaked havoc and was almost catastrophic.

Local angler Ryan Casey managed his first ever double figure Cod from the shore, with a beautifully conditioned fish of 10bl 13oz.

Those were just a few of the decent Cod caught over the weekend. There was also a number of Conger and Thornback Rays, as well as a few Bull Huss. Regular contributor Danny Hardwick fished Chesil on Saturday with some friends. They started off during the day, with fishing coming both during daylight and as darkness fell. What none of them expected was to be hit by a rogue wave. Danny reports that the wave came out of nowhere and hit everyone in the vicinity. Almost everyone had their rod’s, bivvies and tackle boxes smashed up or swept away. Thankfully no one was hurt.

I am pleased to announce that last month’s winner of the fish recipe competition is Steve Hooper with Hoopers Humble Flounder recipe Steve wins a copy of Henry Gilbey’s Ultimate Fishing Adventures and is in with a chance of winning the prize for the year, of a trip to River Cottage to take part in the Shoreline fishing course.

We would love to see more fish or shellfish recipes. This month I am offering a half day guided session with myself as the prize. Send in your recipe and a picture or two for a chance to win.

Portland Harbour: Surf along the beach road, but calm in most other areas with lightly coloured water

Chesil Beach forecast: With the water still coloured and the wind from the north you should be able to cast out a reasonable distance and stand a good chance of picking up a Cod or a Conger. Peeler crab, squid and lugworm will be the best baits. It seems as though the Whiting have moved on, but there are some large Pout being caught, with some reaching almost 2lb.

Expect Rockling and Dabs from Abbotsbury during the day and plenty of Dogfish at night. If you are after a Conger then use a whole Squid.

Portland: Unfortunately the water didn’t clear as I hoped it would over the weekend, so I didn’t get the chance to try for a Wrasse or any Pollock, but I am hopeful that it will clear enough over the next day or two. In the meantime it is worth trying the rock marks for Bull Huss, Conger and large Rockling.

Portland Harbour: I didn’t see anyone fish the harbour over the weekend, but it is well worth a go for some Flounder.

Weymouth Bay: The North Easterly wind will kick up a nice surf at Preston Beach,  for most of today and then again towards the end of the week. Expect Flounder, Dabs and small Bass in the surf. When it calms down the Rockling will move in. Ryan Casey had a couple of nice 3 Bearded Rockling in that area on a night session late last week.

I am heading down t tone Pier now for a try for some mini species on LRF gear.

One Response to "Rogue waves and late winter run of Cod"