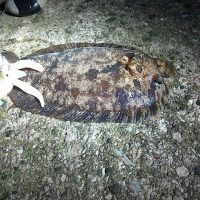 Scratching in the surf

Now certainly is the time of year when the fishing around South Devon can be particularly tough. The whiting have all but gone leaving the main targets relatively small, not easy to find and you simply have to put the hours in to get great results. This is not exactly an inspiring time for the everyday shore fisherman. The recent weather with a succession of low pressure systems causing strong winds and downpours  also does not get you feeling like heading out. There are fish to catch though if you want to enjoy a few hours on the beach as my dad and I have been doing recently.

If you have read my previous posts you will have seen that my dad has not long got into his shore fishing. For Christmas I had a 12ft rod remade up for him and ever since he has been chomping at the bit to get out and christen it. With the fishing not being too brilliant we opted not to travel far and have been hitting the beaches in the Dawlish and Teignmouth areas of the coastline. Our first sortee was to a small cove to the West of Dawlish beach. This was an area I had wanted to fish for a long time but had always been scuppered by big storms whenever I ventured down. This time, despite some high Southwest winds, the beach was decidedly fishable. The surf was stirring things up close to the shore and there was some fishy looking colour to the water.

The cove is surrounded by two small breakwaters protecting the train tracks behind. Beyond the breakers there are small broken reefs and gulleys. The place has a lot of potential for good fishing in my opinion. This first ever session saw us casting from the centre of the beach on a rising tide. I fished a large bait into the surf hoping for a nice bass and another rod further out to see what else might be about. Dad was getting to grips with casting his new, more powerful rod and was flicking small baits just beyond the breakers, at most, 40 yards. Squalls of rain and breeze came and went as the tide slowly rose. I knew fishing would be tough and the first couple of hours proved me right with no bites and barely a touch on any of the baits. Just before dusk began to settle in I noticed my dad’s pull down sharply and rise back into position, a definite bite but not the bass bite I expected to see in such conditions. Dad was keen to see if he had a fish but waited patiently to see if the bite would show again. A cup of coffee later and he could take it no more. A bend in his rod tip showed me he had something on and it wasn’t long before a nice plump flounder was sliding up the sand out of the churning waves.

Not the biggest fish but it made my dad’s day and got him a fish on his new rod. It was in great condition and duly went back strongly. Inspired, dad carried on casting just beyond the surf line saying he wanted a bigger one! Unfortunately that didn’t transpire. Darkness fell completely around us at the top of the tide, broken only by the lights of the passing trains, their rumbling muffled by the pounding waves. I struggled even after dark and had no bites at all. My dad however thoroughly enjoyed himself adding pout and shore rockling to his haul. With the tide ebbing away we became aware that there was a chill in the air and looked up to see a glorious clear sky full of stars which seemed in sharp focus that night. We called it a night a couple of hours after high water and arranged our next trip for the following week.

This time we made our way to Teignmouth to fish the main beach not too far from the mouth from the River Teign.

This is a beach I have had some really good fishing sessions from in the past. My personal best flounder came from nearby and the bass fishing can be non-stop later in the year. The river itself is one of the most famous flounder estuaries in the country. With large gusts of wind blowing straight down the estuary the beach was the obvious choice to have the breeze coming over our backs. We adopted the same tactics as the week before and fished the tide up. Once again bites were hard to come by until just before dark when dad missed what looked like a good flounder bite; my fault for telling him to lift into it too soon! Not long after the sun had disappeared behind Dartmoor did the fish come on the feed in force. I got the first bite on a small bait cast as far as I could get it (not a bad distance with the wind behind!) It looked suspiciously like a whiting but I was very pleased to find a small bar of silver skim its way through the coloured sea to my feet.

This was followed straight away by another. Then my dad’s rod start tapping away with the signs of another fat little school bass. The fish were really on the feed. I’d set dad up with some small wire booms on his rig which seems to work fantastically in the surf, the short snoods rarely tangle and the catch rate was much higher than for my plain flapping rig. He was over the moon to land a double shot of bass and a whiting, followed up with more bass. He then added a fat five-bearded rockling to his count.

He was catching two fish to one on me using his scratching rig in the surf and was overjoyed at the end of the session when he tallied up six species over his two sessions, three of them new fish for his catch list. I was happy with a few schoolies myself and I also winkled out a five-bearded rockling for my annual species tally right on the last cast of the night. Two very enjoyable trips at not the best time of year. It was awesome to see my dad really getting to grips with his fishing now. We will be out together again very soon to try to up his species tally and see what else we can get from the local surf beaches.

Elsewhere around the coast it has been a similar story of school bass and various smaller species. Interestingly a few smoothounds, small plaice and rays have started to show in the South Hams areas, hopefully a sign that it won’t be long before things improve dramatically. My good friend Mark has been out and about trying for the big predators. A few strap congers have come his way. He also caught an intriguing rarity, a topnot, on one of his conger baits.

A fish I’ve never seen in the flesh but becoming a more common capture in these days of species hunting and LRF fishing.

The coming weeks locally will see hopefully more plaice turning up around the South Hams. Small eyed, spotted and thornback rays are also viable targets as the month progresses. If the weather settles down a bit and the sea clears, mackerel will also be showing from the Torbay marks.

2 Responses to "Scratching in the surf"