Fishing Tails > All Articles > Reviews > Lure > Seaspin Stria 95 – Review
How important is the choice of colour when Lure fishing? The Mullet are back. 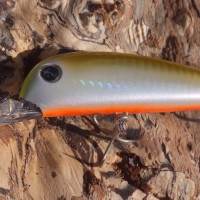 My second lure review and my second review on a Seaspin lure, and no I’m not on the payroll they just make good reasonably priced lures which are a bit different.

So what is it about the Stria that makes it different, quite simply its wiggle!. Even at slow retrieves this lure puts on a serious rolling action and retrieved at speed it  fairly thumps the water as it cuts through it. I’ve never seen any other lure put on such a big action at any speed! It also has internal marbles, as a weight transference system, which click as it wobbles making this a pretty noisy lure as well. Watch the video to see its action and hear its regular click.

A medium depth lure that can be persuaded to run as shallow as 1 foot with the rod tip up and, thanks to its negative buoyancy, as deep as 3m or more, This makes it a very flexible lure to have  in your lure box as it can be fished fast and slow at a large range of depths and attract attention at all of them. The slow sinking property makes this a lure for the experienced angler as it won’t float out of trouble should you get it too deep. I lost my first one very quickly as I was not ready for how deep this thing can go and snagged up on the rocks.

It’s not the best caster in my A box by any means but it flies pretty well given its unusual shape thanks to the transference system mentioned earlier. The finish is good like all Seaspins and the trebles are sharp and strong.

My favorite use for this lure is to fish it at night with a dead slow retrieve with the rod tip up, this gives the fish plenty of time to locate it, helped I’m sure by the wiggle and the regular clicks from the marbles. I particularly like the luminous white for this job.

If you are a regular reader of this site you will know, I’m sure, that it was this particular lure that caught my monster Chub that made Anglers Mail fish of the week. It’s also one of the prizes in this months free draw which ends very soon,

Shakes it stuff at all retrieve speeds, good selection of colours.

Easy to lose due to its slow sinking setup

SUBSCRIBE
How important is the choice of colour when Lure fishing? The Mullet are back.