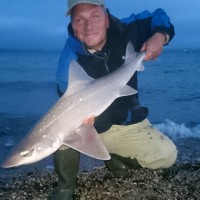 After reading lots of good smoothhound were being caught up the Solent I decided  to try and get a piece of the action! My mate Martin tagged along and we decided on fishing  “parkshore” a venue well known for producing good hounds this time of year. Never having fished that far East before we used the satnav to find our way there.

Like most of the marks in this area of the solent they are shallow water and can suffer strong tides and weed. We chose a medium tide with high water around 10pm to coincide with darkness. On arriving  I found myself fishing with England junior Tom Whatnaby on my left and an on my right Simon Bristow a mate who I had met and had some good success withe plaice at sandbanks earlier in the year. We were all using similar rigs pulley or drop down pulleys with 60lb traces to combat the abrasive mouths of the smoothhound.

Using peeler crab and ragworm, early evening came and went without any major drama but as the sun dipped and dusk came the fishing went ballistic! Within a few minutes all of us were screaming clutches and bent rods.

We were all using two rods and couple of times we would be playing a fish on one rod and the other would scream off as these formula 1 fish hit the baits.
The fishing was fast and furious running around landing fish and playing two at a time. My pb for smoothhound was 6lb caught at sandbanks, I absolutely smashed that with a fish of 12lb 4oz.

Martin beat his p/b. with an 11lb 6oz and there was more to come. Simon suggested as it got darker the better fish may move in and young Tom was in for a treat and true to form  he broke his personal best with three fish over 13lb the biggest a cracking fish of 14lb 7oz. Towards midnight the weed picked up and we decided to call it a day as we were exhausted but very happy. We lost count of smaller hounds we had caught but very happy with the bigger fish we landed.

Needless to say we will be fishing there again and can’t wait for the next set of half decent tides.

Sandbanks has thrown up the odd decent bass on the bigger tides with the odd smaller smoothhound at night. As the warm weather continues we might see some decent sole on night tides. The mullet are showing on all marks around the harbour, though it’s not much fun fishing in the wind we’ve had. I like to sight fish for the mullet which is nNot much good when the water is the colour of drinking chocolate.

Further east along Milford rays still showing and along the purbecks the bass and  wrasse fishing is in full swing.

If you can get the fresh mackerel there are good conger and huss on the heavy rock marks.

I will be offering guiding sessions midweek in the evening for mullet and  bass around the Poole Harbour sandbanks area. With guiding in the purbecks on Saturdays.

One Response to "Solent Smoothounds"