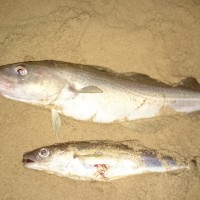 After watching and waiting all the previous week for the weather to worsen it never happened . So last Saturday saw me with 200 prime lug and frozen cuttlefish and less than perfect conditions forecast for cod fishing. Coupled with that my usual fishing buddy Martin couldn’t make it due to work commitments; so again decisions to make!

I didn’t fancy the long drive to Chesil on my own. Plus I didn’t fancy sharing chesil beach with the other ten zillion anglers chasing the Cod! The big tides meant venues close to me like Milford Shingle bank or Barton on Sea would be hard work holding bottom with big baits, so it was back to Southbourne.

I arrived bang on low water at 6pm and set up three rods, one with a big cuttle bait on a Pennel rig blasted as far as I could for ray or the odd codling. One with a single small hook paternoster baited with lug fished at distance and the other with double paternoster baited with lug in hope for any late sole.
Within minutes the single lug bait rod was rattling with whiting bites. I had expected to catch some small Whiting at this venue. But after the first cast I was very happy to reel in a very sizeable whiting. Almost on a par with what I would expect from Chesil. While admiring my Whiting the reel on the rod baited with cuttle clicked a few times as something played with the bait. When I fish for ray I like to to back off the clutch and engage the ratchet. The ratchet on the Akios I use is very loud and on more than one occasion it has frightened me to death as a fish takes off!
After a few minutes it was clear I hadn’t hooked a ray but was very pleased to land a nice codling of 2 or 3lb. After that it was a steady stream of half decent whiting all night. With a couple of school bass thrown in. Mostly on the single worm bait. I didn’t see any sole but think it may be a little late for them now.

This week we all waited with baited breath as the the perfect cod fishing conditions started materialise towards the weekend. Strong wind and rain dropping off around 6pm on Saturday perfect for fishing Saturday night! Unfortunately the forecast looked good but I knew straight away from last week that I couldn’t dig any lugworm on these neap tides this weekend. So for me, Cod fishing at Chesil or anywhere was ruled out.

With no Cod fishing on the cards we decided to fish Barton on Sea again. The plan was to use squid/cuttlefish baits at distance for the rays and maybe pick up any bonus cod along the way.
There was a slight flaw in this plan!! Mother nature had decided she hadn’t finished with her wind assault on the beach yet.
We had no idea until we arrived at the the beach and was greeted with a surf line at least 200 metres out and beyond that huge rollers smashing in. Conditions I considered were safe as we were well above the waterline but almost unfishable as there was just no “fishy” water to fish in. We persevered for a couple of hours, able to hold bottom even with amount of weed about. But resigned ourselves to the fact that in those conditions this fish would be just on the other side of the rollers. Some 500 meters out!!

On our way home we discussed where we could have gone to get away from the open beaches and rough water? Only one venue sprang to mind “Poole Harbour “.

I would have been happy to fish one of the many of the marks it has to offer, as no matter which way or how strong the wind is. You can always find a spot to set up out of it.

They are catching flounders off the beach on many of usual venues. Hamworthy Park, Baiter, Lake pier to name a few. Personally though I would like to see a couple of hard frosts before  my flounder season starts.

Elsewhere I have heard unconfirmed reports of blonde rays coming from sandbanks. It’s not unusual to get the odd ray there. But this was a couple in a session Hopefully though the commercial ray ban is working for the better. Bass are always on the cards there as well.

The Bournemouth and Boscombe piers continue to produce good squid as well as whiting bass and sole to those fishing with worm baits.

Poole Harbour in the boats have seen plaice over 5lb. Lots of codling are also being caught throughout the deeper channels.
As it gets colder we will see the large shoals of herring turn up around the harbour entrance. The best way to catch these is with small hockeye or sabiki type feathers.
Of course the flounder fishing will come into its own both from the beach and in the boat. It’s a good chance to really scale down your tackle. Off the boat your not affected by the amount of weight you have to use. Try a 6lb class rod reel and line or braid. Then you have a proper fight on your hands!!!