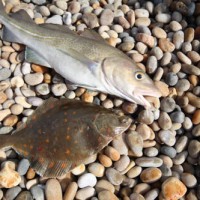 Chesil Beach is not a well known summer Cod mark, and to be honest I don’t think it ever will be. However reports from along the beach this week are suggesting that more than a few Cod have been caught. I even heard from a reliable source that one weighing 9lb was caught at West Bexington.

Is this a one off, where a large shoal are just passing through, or is it as some suggested, a very early start to the Cod Season. Most of the Codling that have been caught have come on Peeler Crab baits, that were put out to tempt a Smoothound. Personally I would rather catch a Smoothound, but it is better than my last couple of attempts for the hounds, as all I caught on those were Wrasse.

I am going to be fishing everyday for the next week, both lure and bait, so it will be interesting to see if I manage to get any Codling. I am certainly going after the Smoothounds, as they are one of my favourite species. I love the power of a Smoothound. Even a 6lb fish can pull your rod out of your rod rest, so I had better be careful, as I could do without losing any more rods.

Some of you may remember that I was out wrecking with Luke Pettis on Snapper last week. Whilst I was out I let Luke have a quick go on my rod, where he decided to show everyone how to catch some Cod. I managed to catch it in this short video.

Luke is out again this weekend on a wreck trip and possibly a Turbot and Bass trip. I know he has some places left. If you fancy a trip out with him then give him a call 07833 492948

I know I promised you an article on salt water fly fishing, and a photo competition this week. Adrian will hopefully have the competition up and running this afternoon, and I decided to hold back on the fly fish article, and instead we had a couple of great articles from Darren and Hazel. Darren produced an article on Sole fishing in the Thames, and Hazel’s article on digging Lugworm has tips for everyone. They are at the bottom of the page if you haven’t already read them.

Chesil Beach:  Calm and almost clear with reports of weed at Abbotsbury and West Bexington

Chesil Beach forecast: I had a message yesterday afternoon saying that there was a lot of weed down at Abbotsbury and West Bexington, which was making fishing very difficult. This could be as a result of the strong easterly winds, that have been hitting the easterly facing beaches and dislodging weed, which has then been carried on down the coast. If anyone is fishing that area this morning, please send me a message either through email, or via our Facebook page and I will update this. UPDATE: Any weed that was there has now cleared

The Portland and Ferrybridge end of the beach is clear of weed and has been fishing reasonably well. Mackerel have been showing but mostly not until later in the afternoon.

The Smoothound have not been as prolific as they were last year yet, but there seems to be more Rays again this year. I know of several Undulates being caught from the Cove area and my mate Paul had two nice Small Eyed Ray on Sandeel.

Plenty of Gurnard being caught from all along the beach, but the Bream have been thin on the ground this week. As the tides start to improve on Sunday we might see a few more caught.

A word of warning for anyone coming down on Saturday to fish Chesil. It will be uncomfortable with force 4 and 5 SW winds right in your face. The plus side to this is it may well bring in some Bass.

Portland: Wrasse fishing should be good all around the Island, especially the East side. Pollock once again seem to be very hit and miss, but having a go at first and last light will increase your chances of catching some.

Portland Harbour: I will be having a go in the harbour this morning to see if there are any more Bass. But Mullet are in good numbers

The inner harbour is full of Mullet, both thick and thin lipped. Use floating bread crust to try and tempt the Thick Lipped.

SUBSCRIBE
Sole fishing on the Thames Always expect the unexpected