Fishing Tails > All Articles > Tips > Lure > The Art of Squid Fishing (Eging)
More bad weather Better order your bait, it is going to get busy 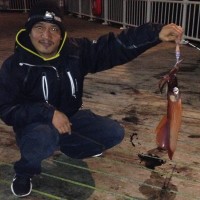 The Art of Squid Fishing (Eging)

Squid fishing or Eging, has been around for so long in Japan its sometimes described as an art form,  but it’s only  really in the last few years that it has became became popular in the UK.  I am no expert on Squid fishing, so I was lucky enough to persuade Marlon Hilario, to write this article for us. Marlon has been fishing for Squid for a number of years and has recently had some outstanding successes.

Basically its fishing for squid with special jigs made to look like prawns or in Japanese “egi”. In its most simple form it’s jigging for squid  with a selection of different lures but like most things if you are prepared to dig a bit deeper into the subtleties of the technique the rewards can be great!

Squid lures are categorised by size,weight and consequently their decent speed: common sizes usually range from 2.5 -4.5 and decent speeds between 2.5 m/s -4.5 m/s, the heavier the lure the faster the descent speed.  Last year my setup was just using the basic squid 3.5 jigs which cost £3-£4 and a light Shakespeare spinning rod £20.  Catching 4-6 squid on calm single digit winds during the nights. This year I took  egiing more seriously and researched into ways to improve both setup, techniques and gained experience into the variety of jigs out there.

Even though our squid season only has a  2 to 3 month window, I decided to plunge into my own dedicated squid setup within what I would call a reasonable budget.

The benefits of the Egi rod is that the eyes are so small that the line just flies through.  When whipping the rod in a jerking motion 3 to 4 times, the line doesn’t wrap around the tip of the rod or get caught up within the eyes.  The rod is very light and with the braid line, you can actually feel when the squid even touch the jig giving you that advantage when catching.

A selection of the more advanced squid jigs designed and developed to improve catch ratios ranging in price between £8-£16. Just like lures, the variety can be overwhelming with weight, colour, glow, size to match weather conditions. In my experience this year,  jig brands like the popular Shimano, Yo-Zuri, Daiwa and Yamashita really do improve your catch ratio.

I particularly like the  Yamashita Egi Q Live, with its warm soft touch jacket (yes squid search by heat signature as well as sight and touch!)

What I have noticed this year is that the investment in these jigs out fishes all the anglers standard jigs if the squid are about.  Catch ratio has been generally 4:1 but in some cases has been as high 9:1,  hence on our local pier I seem to have acquired the name  “Squid man”. There have been days where everyone has been there catching nothing and I just turn up, cast and catch much to the frustration and bafflement of others.

Size of squid will also relate to size of jig.  Using the standard 3.5 or even 4.0 jig are great to target the big squid but if there are only small squid they will ignore it.  During the early start of the season, a number of squid were caught on 1.8 size.  One other method I used was having two jigs on a rig.  Using a dropper loop at the top for a 1.8 jig and then on end 50cm down have a 3.0 or 3.5 on the end so you have best of both sizes.  Once you catch you can gauge which one is the more popular and what size audience is in the water.  Another factor to consider is the weight of your jig.  Jigs can come in different sizes and weights can vary again from 18g for shallow areas to deep or windy conditions requiring 30g.

Other techniques include using a float and approximately 5 feet depth with your jig.  From Weymouth pleasure pier, you only need 3 or 4 foot deep or else it just hooks up the weed bed.  I’ve also noticed this method almost guarantees your catch as the float keeps the tension consistent.  Whether you’re using a float or egiing, once you feel the bite always keep the tension there as the minute there is slack, chances are, the squid will get away.

Strike time is when the jig is floating down to the bottom after the jig has been worked.  Working the jig is primarily to get its attention like a prawn moving around.  The squid will just follow it and investigate as such.  Once its floating down, that’s when it will strike so it’s always good depending on depth to let your jig sink for 10-15 seconds after working it.  Water conditions generally need to be clear, calm and prime time is 2hrs either side of high and low tide.

Last year I caught just over 300 squid from the beginning of September to early November primarily from Bournemouth pier.  Other venues include Poole entrance by the ferry crossing off the jetty, Boscombe Pier and also from Pleasure pier based in Weymouth. If you know of other good marks please let others know by mentioning them in the comments section below.

Why am I into egiing ?

The main thing that got me into it is the fact that you can catch a squid and even if you lose it, you can catch it again after working your jig in the area you lost it.

There was one time where my jig got caught in the line and was hanging upside down.  I felt the bite and every time I attempted to lift it out the water it would let go.  This happened 5 times within a minute or so and funnily enough as I kept dropping it, one of my fellow fisherman also placed their jig near mine and I believe he caught it in the end.  From then onwards, the addiction of squidding begun, knowing that if it gets away, you can still entice it back.

The squid are still around, so still time to give it a go, it’s great fun and squid make for good bait and eating!

SUBSCRIBE
More bad weather Better order your bait, it is going to get busy

6 Responses to "The Art of Squid Fishing (Eging)"