Fishing Tails > All Articles > Tips > The underwater world of fishing
Spring Cod What fish can you catch in April? 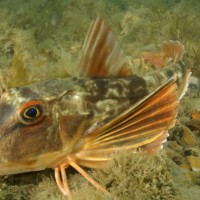 The underwater world of fishing

There is one thing fishermen and scuba divers have in common – fish. We are both fascinated by them.

Experienced fishermen know where and when to hunt certain species, but us divers know what they are like underwater, and that trumps everything else. I’m sorry but it does. Fishermen have no idea that a sole covers itself in sand during the day and won’t take food until something swims over their mouth, for example. Us scuba divers see this and a lot more natural behaviour that fishermen would love to. And because I’m both a diver and a fishermen, I’m going to give you a glimpse into my world.

Let’s start from the shore. If you fish off a beach, don’t assume the seabed mimics the sand or gravel that gets in your sandwiches. Some beaches are flat sand for a long way out, but most will have a transitional zone, below the low watermark. It’s a place where aquatic life really starts and quite often it forms a lip sometimes with a small wall that can step the seabed down a couple of metres. Take Chesil Beach as an example. The pebbles stop only a few metres from the low tide line and the seabed changes dramatically. A line of boulders, some as big as a car, follow the contour of the seashore and are covered in sunlight loving algae. This is a nursery area for fish and crustaceans and a hunting ground for larger species such as bass and mackerel, in summer and cod in autumn and winter. In summer, the predatory fish stealthily move through the fronds of algae to ambush fry or actively hunt at the base of the boulders where overhangs provide invertebrates with a feeding zone. In autumn that hairy covering dies off and sinks to the bottom to be devoured by all manner of crustaceans, which in turn become food for predatory fish.

Moving out a little more, often the seabed changes again. Chesil Cove for example, becomes a mishmash of large boulders (some as big as a house) and sand patches. The patches hold colonies of sandeels and we all know what like sandeels. Yep Bass. I have seen a dozen bass appear as if from nowhere and tear onto a shimmering ball of sandeels. The bass were not coming up from below, but rather down from above. The white undersides of the fish hide them in the glare created by the surface and their large and powerful predator’s eyes must give them vision that can look down as well as up.

On many beaches the rocky zone gives way to sand or gravel. And along much of the south coast the seabed is a combination of things as well as huge fields of slipper limpets and their discarded shells. I cannot underestimate how good a bait these ubiquitous shellfish must be in the right place. After a storm, if you find them on a beach, use them because they’ll will be the most plentiful food in the water and what the fish will come in to feed on.

Even flat beaches and seabeds often have small features. It could be a patch of clay or even a rock the size of a fridge. A feature doesn’t have to be large to become interesting to marine life. If it is the only thing around for a good few metres it will become colonised. I once dived a new area to see what was there and for ten minutes found nothing but sand and then a rock appeared. It was no bigger than a couple of car tyres stacked together, but was brimming with life. Around it swam several wrasse, a John Dory and next to it buried in the sand was a sole. Around it was nothing. Had I been fishing and missed the mark by even five metres I wouldn’t have caught a thing. That is, sometimes, how accurate you really need to be. Other places are a lot more forgiving as they provide lots of cover and hunting ground for shorelines species.

Wrasse, for example, are a popular species to target. They form packs and hunt in groups of smaller fish that follow bigger fish. The bigger fish (or a diver) kicks up the bottom and the smaller ones dart in and grab whatever invertebrate has been disturbed.

In summer Wrasse prefer the edges of the boulders where they can pick off crustaceans and other invertebrates, but in the autumn when the weed starts to die and coats the seabed wrasse move to the rotting weed to feed and can be found out in the open.

I could go on from species to species, but I promised only a glimpse.

However, no diver could fail to talk about shipwrecks. The UK’s coast is littered with them, and none look how you expect. The quintessential shipwreck with an almost pristine ship sitting upright on the bottom looking neat and tidy is a thing of Hollywood movies.

Wrecks are places of twisted metal, old ropes and rubbish. You may as well throw your fishing gear into a mincer. Jagged holes form as the sea eats away at the metal. Bulk heads collapse, railings split and human detritus litters the seabed around a wreck. You see none of that on a sounder. Even a side scan sonar image only gives away a fraction of the evil that awaits your gear.

But the fish life can be awesome. Fish love wrecks because they provide everything they need – food, shelter and other fish to make babies. Some wrecks are covered in fish. Mind you some are so covered in Pout its hard to see the wreck. The other fish you want to catch like pollock, cod, whiting and ling are more spread out. Ling tend to hide in shelter. They hide underneath the hull, or inside where they can launch lightning fast attacks from. Pollock are patrollers who forage over the entire wreck, as do cod. Whiting tend to prefer certain areas. And as for conger, they lurk inside the tightest of holes only venturing out at night or to the smelliest  of baits.

Divers tend to only see wrecks during slack water, but when the tide runs a wreck becomes a different place. The hull forms a barrier and water is rushed over the top and then forms an eddy on the leeward side. Just inside the lee is where most of the larger fish tend to hunt as the current catches unwary smaller fish. The water rushing over the wreck is faster than elsewhere as water speeds up as it is squeezed over.

Do not though underestimate the power of some large fish. I once sat in the lee created by a road Bridge leg as a six knot current swept past. I saw smaller fish sent flying back unable to fight the current and then watched a pollock of about 20lbs casually swim upstream past me. So larger fish can and do go pretty much anywhere they like.

I hope that tiny glimpse into my underwater world has given you some food for thought the next time you head out. Never assume the seabed is like the beach. Look at contour maps and even Google earth, which allows you to see a little of the seabed and help you pick out certain features. Think about the fish’s prey and how and where they live and then you can start to think like a fish which should give you an advantage to catch them.

SUBSCRIBE
Spring Cod What fish can you catch in April?

5 Responses to "The underwater world of fishing"