Fishing Tails > All Articles > Reports > Chesil Beach > What a weekend
One of the best day’s fishing on Chesil ever Is chesil Beach going to be fishable? Updated 10.30am Sunday 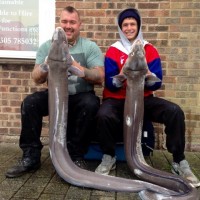 I hope you had as good a weekends fishing as I did. I am sure that for most of you that travelled to Chesil, you would have had a good session. Fishing was tougher on Saturday and Sunday than it was on Friday when I had an amazing session. The weed was a major problem, especially on the flood tide, but once it cleared the fishing was good. I didn’t spend too long on the Chesil on Saturday but when I did go down there I could see it was very busy.

I know that there was a lot of Codling caught and the biggest I heard about was a 14lb. fish, but most of them were around the 1-2lb. mark. Conditions for the rest of the week will be changeable, with some strong winds forecast for next weekend again, so there is a good chance of getting some more great fishing.

I spent all day yesterday fishing on board Gypsy in the Weymouth Angling Society monthly boat competition. It started off a bit slow, but then the Whiting came on the feed. We had Whiting all day, with some nice sized fish amongst them. What was surprising was the number of Conger that we caught from an inshore reef mark. Almost everyone on the boat landed at least one, but Ryan Casey and Wayne Frapple both managed a monster eel each that went over 45lb. Ryan had his on a 2/0 hook with a 40lb snood on a boat match rod.

Yesterday was the first time I used my new Cinnetic boat match rod. It took some time to get used to a 4.2m rod in the confines of the boat. I will be doing a review of it in the future, but I can say that I am impressed with the first outing.

Chesil Beach: Waves of just over a metre with coloured water

Chesil Beach forecast: Cod, Cod and more Cod, but thankfully thats not all that will be around on Chesil for the next few days. There are still Bream and a few Trigger showing and conditions will be pretty calm tomorrow, giving anglers a chance to target the large number of Garfish that are around still. When the winds return again later in the week Bass will be a good species to target.

Portland: Although Wrasse don’t normally like to feed when conditions are rough they will normally get back into a feeding routine after a few days of rougher weather. This gives us a chance to target them from the Island, especially if you want a change of scenery away from Chesil. This is the time of year that I like to lure fish, but unfortunately the water clarity is preventing that at the moment. I hope it clears before the Bass move on again.

With the water being coloured then fishing for Conger and Bull Huss should be good at night and during the day. As usual large fish baits work for both of those species.

Portland Harbour: The harbour is a good mark to fish if you are looking for a bit of shelter and the chance of a Bass or Flounder. If you are lucky you might be able to find the Gilthead, but they do not seem to be on any one mark for longer than a day. If you do want to target Gilthead then Lugworm and Mussels are good baits.

Weymouth Bay: Preston Beach will provide good shelter with the possibility of a Bass. There are plenty of Flounder and Dabs being caught on the beach. The piers are still fishing well , and should continue to do so for at least another month.

SUBSCRIBE
One of the best day’s fishing on Chesil ever Is chesil Beach going to be fishable? Updated 10.30am Sunday

2 Responses to "What a weekend"