LRF Profile – The Giant Goby A rough weekend ahead

My fishing trips have been rather one dimensional through January. Following a successful trip first out finally locating a few winter flounder I decided to head out to the open coast for much of the month in search of dabs. These little flatfish have become scarce in South Devon in recent years. A few decent specimens still appear in January, usually from the South Hams beaches, but they are also caught from the deeper water marks around Torbay. I had a couple of sessions in the bay in the month, firstly at a favourite rock mark, Thunder Hole. As with many of the Torbay rock marks this location is based around an old limestone quarry but derives its name from the past when there used to be a blow hole in the rocks. This has long since eroded away but the sea still surges up the gulley with some ferocity. 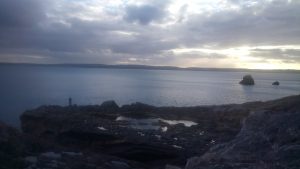 The mark isn’t the most comfortable to fish with rocks standing at angles but it is worth the effort if you put the hours in. I was hopeful I might find a dab or two casting onto the clean sand out towards the centre of Torbay but unfortunately I was plagued by whiting. Every cast resulted in at least one fish, each around the 10oz mark.

Two weeks later a similar story was the result when I headed to Babbacombe Pier, also in Torbay. In the past I had had good results here for dabs in the wintwr including a personal best of around 1lb. The pier is a short concrete platform which juts out into Babbacombe Bay. The range of species it is possible to catch here is phenomenal; virtually anything could show. The pier was busy when I arrived but I managed to squeeze in at the very end, ideal for casting onto a sandbank in the bay where the flatfish like to hold up. However it was not to be and another succession of average sized whiting devoured my baits before anything else could find them. I did get to witness another angler fishing a club match land a lovely 1lb fish. This was huge and should have been much heavier but it was very thin. Rain came down halfway through my session which saw the majority of guys leave and eventually I had the pier to myself which allowed me to fan my casts around a bit more. I found plenty more whiting but was finally rewarded, not with a dab but a feisty small conger eel. 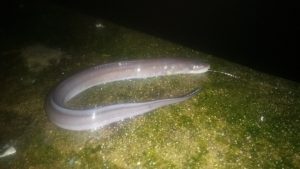 With January over and whiting everywhere I felt a change of scene was in order. I contacted my good friend Mark to see if he was up for heading out. Mark is passionate about fishing for big predators from the shore and spends a lot of his time casting large baits in search of a conger eel or big bull huss. Despite this Mark has enjoyed fishing alongside me when I’ve been searching for flatties. However this time I felt I wanted to see how the heavy duty fishing is done. Years ago he had shown me a spot on Sharkham Head, close to Brixham. Having only fished it once before I suggested we try to avoid the whiting and have a go here. The area is well known for its rough ground, perfect for big predators to hunt around. A good number of double figure huss and eels are caught in the area every year. From here Mark would have the opportunity to fish heavy and I was keen to search out the ground further out to see what potential the mark might have for other species. A few years had passed since we’d been down and it took us a while to find our way through the undergrowth to the location. Casts were made in the dying light of another beautiful winter day. I had found that the ground further out from our rock platform was decidedly mixed. I use sharp but springy hooks which bend out of snags quite well under pressure and managed to not lose too much gear. I also had the pleasure of catching a beautifully marked sea scorpion before the light faded away. He was in full breeding colours! I love how boisterous these fish are and he buzzed angrily before I popped him back in the water to continue his search for a mate. 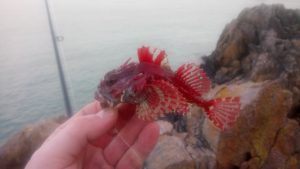 Not long after we lost the light we also hit the bottom of the tide. Mark suggested this was a good time for interest from predators in his big fish baits cast no more than 40 yards from our perch. His feelings were spot on as not long after a couple of short runs clicked off his ratchet. Feeling for the fish to run again he expertly lifted into something which fought back. Excitedly I got my gear out of the way in case I needed to get down to land the fish. My excitement, and Marks, were short lived as not long after a conger eel rolled on the surface before spitting the hooks and dropping back into the depths. It wasn’t a huge fish, maybe 10lbs at the very most but it would’ve been great to get it ashore. The next few hours flew by without anymore interest. I landed a small pout but it was very quiet. I had started to think about how catching lots of whiting might have been preferable to a slow session on the rocks when, half tide up, Mark’s ratchet buzzed into life once again. This time the fish really scrapped. A tug of war ensued and I hoped we would be seeing a decent eel but instead a decent huss rose to the surface. I scrambled down the rocks to help lift the fish up to our camp. I am always impressed by the power of these animals. We speculated that it might go to eight pounds but the scales only pulled down to 6lb 7oz. Still a great fish to see. 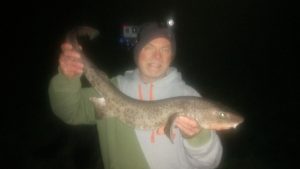 I will have to get myself some slightly heavier gear and have a concerted effort at targeting some of these predators myself, they could persuade me away from flatfish, especially when its a wonderland for whiting on the open coast through the winter. I think the mark has a lot of potential for a number of species and I will experiment here again at another time of year to see what might be about.

We are now entering the doldrum times around our coast. Whiting, dogfish, pout and rockling have been the main catches recently with a fair few bass around. Interestingly mackerel are being caught around Torbay with plenty of herring mixed with those shoals. February is a tough time to fish in general but locally huss and conger eels will still be around from the rough areas. Now is a good time to try for thornback rays from the estuaries of the Dart and Salcombe. Night tides are best but these fish can be caught in daylight, finding the right state of the tide is the key. Early plaice may start to be caught toward the end of the month.

LRF Profile – The Giant Goby A rough weekend ahead