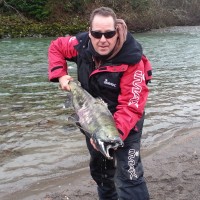 I am still in Canada, and oh how things fall apart when your not here to keep an eye on things. I did write a forecast for Wednesday and Thursday, only to find out today when I looked on line that it had not been put up. Anyway this is likely to be the last one for possibly as long as a week, as I am heading to the Amazon tomorrow, and I have been informed that it is highly unlikely I will be able to get internet access until Friday. Before I go on and tell you what you will hopefully catch over the weekend, I will give you a little taster as to what I have been up to this week.

I can’t say too much as my contract with the TV Channel doesn’t allow me to talk about anything we have done during the filming days. However I will say that yesterday I caught a fish that is going to be talked about for a long time, and the best thing is you will get to witness its capture early next year when the show is broadcast. I have had quite a few days off from filming which I can talk about.

On my first day off they managed to get hold of a fly rod for me and I went off with our driver Dave to a local spot that he promised me had been fishing well recently. When we arrived it looked stunning but the massive size of the Fraser River made it look very challenging.

Thankfully Dave had talked to the guys at a local tackle shop and they sold him a couple of fly patterns that had been catching. We found a likely looking spot to hold fish and we soon spotted some movement from several Salmon lying just of the edge of a run. I quickly tied the fly on and started casting. It  has been a whilst since I cast a fly on an 8 weight set up, but it didn’t take me long to get back into. Unbelievably I managed to get a take on my first cast. he fish screamed off but within seconds it had spat out the hook. I was a bit gutted but I knew there was more there. A few casts later and the rod hoops over this time I am ready for him. He starts a bit of a run the just stops and sits tights . Every time I try to gain some line it strips it of and sits behind the same rock. After about 10 minutes I was able get the fish to the shore and tail him. I was delighted my first Salmon  after trying for more the 40 years to catch one. It weighed in at 18lb.

Good luck on the beach this weekend. Cod fishing should improve and there are lots of Whiting  about.

Chesil Beach: Medium chop with a small swell of around 1m. The water is clear

Chesil Beach forecast: Plenty of Whiting around especially at night along side your normal Dogfish and Pout. There are one or two Cod showing, but I am sure that there will be a fair few caught over the next couple of days. Herring often become a good bait at this time of year for the Cod who are chasing the Sprats. A few nice Sole have been landed on night time tides from Cogden. Small Lug worm seem to have been the best bait.

Portland: Wrasse fishing now seems to be tailing off slightly, but the Pollock fishing is getting better. The Bill is still covered in nets making Bass fishing very poor.

Portland Harbour: This has picked up a bit with the larger tides. It does seem that it has brought in another influx of Bass. As usual my prefered method of catching the Bass around the harbour is on surface lures.

Weymouth Bay: Best chance of a fish will be from the Pier with Garfish, Pollock, Wrasse and Mackerel the main bulk of your catch. The clear water will make it much easier for some fun with the Squid. Both the Pleasure and the Stone Pier are good marks for Squid.

Boat & Kayak fishing: The charter fleet are still having great catches of Bass, Bream and Plaice from the Race and the Shambles. Smaller boats and Kayaks should take advantage of the Bass and Pollock from inside Portland Harbour. Recent catches have included Smoothound and Thornback Rays. Peeler Crab and Mackerel seem to be the top baits in the harbour at the moment.

Guiding: That’s it for now until after I come back from filming.  My next available date is from the 29th of November. I am taking bookings for both Bass and bait guiding sessions for December. If last year was anything to go by then the Bass  fishing should still be good up until early January. These can be tailored to your requirements including mixed days of bait and lure fishing. Drop me an email for more details sean@fishingtails.co.uk