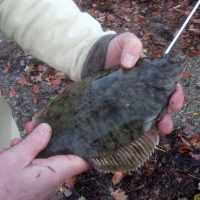 In South Devon the first frosty days of Autumn stir many anglers minds towards digging out the light rods and making their way down to one of the local estuaries in search of a big flounder. The British record flounder was caught in the River Teign in the 1990s, a monster of 5lb 7oz. Each year many fish over 3lb and a few over 4lb are caught from a number of different estuaries along this stretch of coastline. The numbers of larger specimens has dwindled over the years but each estuary contains a reasonably healthy stock of fish.

The first frost of this Autumn occurred over the Bonfire Weekend at the beginning of November. This coincided with the National Flounder Championship being fished over two days on the River Teign. Decent numbers of flounders were caught but the big specimens were elusive, the winning fish a lovely 2lb 12oz specimen. This got me thinking about having a go myself for a couple of sessions.

My first trip was a couple of weeks ago on the set of really big tides which is not ideal in the estuaries as space can become limited to a few marks over high water. The tide brings extra debris on the ebb and many spots dry out completely over low water. My fishing time is limited by work so I make the most of the weekend chance to wet a line and as I stated in my first article, I like to see what might happen. I chose a small creek on the Kingsbridge Estuary system for my first winter flounder foray.  The Kingsbridge system has a massive range of marks but does in general require a bit of walking to get to many of them. I crossed a few fields on public rights of way before descending onto the foreshore and walked a few miles to my spot, a new one for me on the northern bank of the creek close to where it widened into the main estuary waters. The weather was stunning, not a breath of wind to ruffle the waters. The mark seemed ideal with the main tidal channel within easy casting distance and a nice bay just off that tide run to cast into. I cast one bait into the channel and another off to where I could see the crease of the tide run alongside the bay. Small school bass were on to the baits in a flash, giving some fun sport on my light outfits with plenty of slackline bites.

If the bass didn’t get to the bait then unfortunately the crabs did. They would strip the hooks in minutes, not uncommon in fishing the estuaries, particularly the Kingsbridge system. The cold weather usually puts them off the feed but following the frosty weekend the temperatures warmed back up again, meaning the crabs remained on the feed. Fishing at this mark was tough going and I didn’t even get a flounder bite. I was treated to a very relaxing session in the still conditions and a beautiful sunset made the day. Talking to other anglers along the stretch they were also suffering with the crabs and there were many comments about it being ‘too mild’.

Not one to be put off too easily I planned another flounder session for the following weekend. The idea was to head to one of our other estuaries to see if I could tempt a flounder there. My dad again chose to join me. What wasn’t in the plan was Storm Angus hitting our coast with some brutality on the Saturday evening. Over two inches of rain were recorded in Exeter and the resultant floodwater running into the rivers would’ve made the Exe, Teign and Dart virtually unfishable and a waste of time. So we went back to the Kingsbridge area. Without a main river running into the system, the Kingsbridge estuary suffers less from flood water than other systems. Trying to think of a spot ‘on the hoof’ at six in the morning I plumped for an easy access mark not too far from Kingsbridge itself. Even in the gloom of our pre-dawn arrival we could see that the waters were mucky but not the raging torrent one of the main rivers would’ve been and certainly fishable. I figured we would at least be in with a chance of a few more school bass if we could avoid the crabs. We setup in near darkness and cast our first baits out just as light was filtering across the tree tops. The flounder of the Kingsbridge estuary love ragworm over other baits and I showed my dad how to load up his hook. He commented on the size of the bait, a big bunch of wriggling worms and tails, in disbelief that a small bait wouldn’t work better. He flicked his bait some twenty five yards out in front of us and my baits were placed further out and to another spot close in. Straight away we had bites. The tips of my rods rattled with the bites of small bass, my dad’s rod pulled over in a more deliberate manner. To me it was clearly a flounder. I advised that he ignore these initial tugs and allow the fish plenty of time to  chew on his large worm bait. We had a coffee and packed the head torches away as the sun rose. A few more bites on my rod tip made me spring into action but I missed the culprit. A stronger pull on my dad’s rod tip showed the flounder was still interested. He lifted the rod tip and the bend showed he had something. After a bit of gentle pumping and winding he was disappointed to find a clump of weed on his line. This was just caught on the top swivel of his trace though and below that, in the murky shallows was our target species. A flounder on his first cast and first attempt at fishing for them!

Weighing in at 1lb 2oz it was no monster but I don’t think that mattered to him. He was chuffed; I was chuffed too. He debated keeping it for the table but decided to return it. Being only lightly hooked it swam away strongly. Massively enthused that there were flounder to be caught we fished hard as the tide rose, but apart from school bass and baits being stripped by crabs we only had one more flounder bite which resulted in a bare hook. It was a glorious day to be out though after the horrific storm of the night before and we basked in warm sunshine with no wind at all. My dad thoroughly enjoyed the morning, drinking coffee, talking fishing and sending me back to the car to check on the cricket score on a regular basis. We ran out of worms quite quickly due to crab activity and made our way home for lunch.

I am sure we will be out fishing together again soon. We need a cold snap for the crabs to stop feeding so hard and to allow the flounder a chance to home in on the baits, but the fish are there and a number of 3 to 4lb fish will be caught this winter I’m sure.

Elsewhere the usual whiting and dogfish are making up the majority of catches on the open coastline. The weather has remained mostly mild and a number of summer species are still being caught, including smoothounds and gilt-head bream. The mackerel and garfish are still present as well. Now is the time to target a large bass from the open coast with all of the beaches along South Devon worth trying. North East winds are forecast for most of the week which will give a decent surf on most of the beaches for the bass to feed in. Conger eels will also be feeding hard now before the winter really sets in and can be found at most deep water rock and pier venues.

One Response to "It’s time for Flounder"