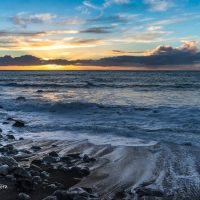 February can be one of the worst months of the year for fishing, especially on Chesil Beach. It is hard to get motivated and leave the warmth of your home, to sit on a windswept and wet beach, just to catch a few Rockling and the odd undersized Whiting. Having said that, I would rather do that and catch a stunning sunset, than sit in front of the TV.

A big thanks to fellow angler Izzy Ismet of Underwater Explorers, for the picture.

So what do we have to look forward to in this late winter spell? Daylight fishing on Chesil may not produce much, unless we get another good SW blow, but night tides produced some exceptional Conger over the past couple of years. There is no need for big casts to get to them, they often swim very close to the shore looking for Pout and Whiting that Squid have attacked then dropped.

Pollock are in their prime during the winter months and as soon as we get some clear water, I will be targeting them with lures from the shoe. Marks such as Chesil Cove and Portland Bill are amongst my favourites. I have found that using small metal shore jigs such as the  one pictured below from Fladen, have proved deadly, with sessions where you are getting a hit or a fish on almost every cast.

Another of my favourite species in the winter has to be Wrasse. I prefer to target Wrasse using lures, but this is much more difficult during the colder months. This is one of the few times that I target them using bait. Hardback, or hermit crab are a brilliant bait, but on some days they prefer ragworm. If you are targeting Wrasse at this time of year, you will have to go heavy. I use 30lb mainline straight through to the rig, then use a simple one hook flapper with a rotten bottom.

Flounder fishing can be in its peek during the latter part of Winter and you can see from some of the reports from Leo and Tom Just how good it is.

The Purbecks often fish well for late Bass and large Rays. They are not the easiest marks to fish, but the effort can be worth it, as Ben Stockley proved on a recent trip.

Lets not forget LRF. For me the best time for LRF fishing is in the winter, when a lot of the larger species are not around. Yes you don’t get as many species as in the summer but it is great fun catching Flounder, Gobies and Herring on light tackle. We will be featuring a lot more LRF in the coming weeks.

Portland: Calm with lightly coloured water water, except on the East side, where the swell is in excess of 1m

Chesil Beach forecast:  As I mentioned earlier, Chesil isnt exactly the hot spot of shore marks at the moment. However with strong easterly winds forecast, long range casts are possible. This may get you out to the odd larger Cod that could be hanging around. There should be some reasonable sized Whiting after dark, as well as a Conger or two.

Portland: A large easterly swell will make for difficult fishing on the East side of the island, but tuck into the West side and try for some Bull Huss, Conger and large Rockling.

Portland Harbour: So many anglers forget how good the Flounder fishing is in the harbour. Sanndsfoot Castle ad Hamm Beach are both excellent marks. Small hooks and Ragworm on a flapper rig will often produce double shots of fat Flounder. If you can find an area where the water depth is 5m or more then you have a good chance of a nice Thornback Ray.

Weymouth Bay: whilst the wind continues  to below from the east the beach will still have a lot of surf running. This is great for a late bass and Flounder.

The Piers will not be the most comfertable of marks, but the inner harour could provide some good LRF fishing, if the water is clear enough.

Guiding: Bass fishing in the spring should be even better than in previous years. The ban on all commercial fishing during February and March, combined with a huge cut in the quotas, will all go to help increase the stock levels. The season carries on until the early winter, so make sure you book early this year.

I specialize in lure fishing and I am offering Fly fishing this year as well. I am still more than happy to go after the multitude of species in this area with bait, whether that is big Wrasse, explosive Smoothound fishing or targeting the tastier fish such as Plaice and Bream. If you want to book a session or find out more information drop me an email at guiding@fishingtails.co.uk

SUBSCRIBE
A huge Bass and the Flounders are finally in! LRF Profile – The Giant Goby