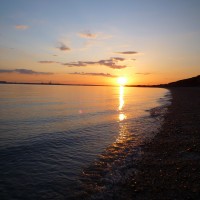 If you want to know some of the best marks to fish in the Solent are then I am glad to say that as promised, loraine has provided me with some very useful information on some of the marks in her area. She has created a map to help you with the locations

Located near to the Gosport ferry terminal, this short pier is free to fish and good for mini-species such as wrasse, gobies and scorpion fish, as well as bass, pollock, mackerel and mullet. It can get very busy during the evenings and weekends in the summer months as a hotspot for feathering for mackerel.

Latest catches: Ballan and corkwing wrasse, goby, long-spined scorpion fish. I have also seen that a Topknot was caught from the pier in the past week, a very rare and unusual catch in this area.

Located in front of Royal Haslar Hospital/Fort Brockhurst, this is a long steep sloping concrete sea wall that is good for a variety of different species: pout, whiting, cod, bass, pollock, mackerel, garfish, wrasse and mullet. Again a hotspot for mackerel feathering in the summer so it can get busy at these times, but the wall fishes well on all tide states.

Bass can be caught very close to the Wall on large baits, such as mackerel heads, whole squid and occasionally lures.

The beach in front of Gilkicker Fort is a steep, shingle beach giving way to sand and deep water. The very strong current and drifting weed can be a problem particularly during the summer months. Species include codling, whiting, dog fish, rays, eels, rockling and mackerel.

This is a wide, shingle bay giving way to sand. There is good fishing all year but it can be busy on a summer’s day with swimming/boating activities. Night fishing is recommended here. The tidal flow is not fast, and weed is often not as much a problem here as other surrounding beaches. A good variety of species can be caught here:  pout, whiting, plaice, eels, rockling, bass, dogfish, small rays, small smoothound and mackerel.

Located in front of the Browndown Camp MOD base and firing range, this is a long steep shingle beach stretching between Stokes Bay and Lee-on-the-Solent. Entry is from either end. Do not enter when the red flags are flying and the gates are shut. The weed can be a problem here, however, there is deep water and mussel beds in places at the low tide level. A variety of species can be caught, including thornback rays, pout, whiting, rockling, flounder, bass and dogfish.

Latest catches: We fished Browndown Beach at the weekend, from 2030 til 0230, high tide 2330, spring 4.4m. Flat calm sea. Weed was present but not too much of a problem provided baits were changed regularly. The bites started after dark and it turned out to be a busy session with pout (largest being 30cm), black bream and dogfish.

This is a long sloping shingle beach giving way to fairly clean sand and mud ground with few snags. The water is deeper in the east heading towards Browndown and shallower nearer to the Hovercraft museum slipway. The tide run is not fast, although weed can be a major problem with large amounts becoming trapped around the area of the eastern end groynes near the Browndown entrance.

Species that can be caught here include pout, whiting, flounder, dogfish, rays, smoothounds, school bass and mackerel. Stingray have been landed from the Hovercraft slipway end also. Mackerel have been seen shoaling close in between groynes both early morning and sunset. It is an extremely busy beach with bathers and boating activities in the summer, so it is best avoided during summer daytimes.

Latest catches: There are still plenty of smoothound, many double-figure, being landed at Hill Head on peeler crab baits.

To the west of Hill Head, beyond the area of chalet bungalows, lies Meon Shore, a gently sloping shingle beach with low lying cliffs behind. This shallow water venue gives way to clean sand further out. At low water the sand bars in places stretch out a long way, so it is best fished on a rising tide, over high and during the first few hours of the ebb. Species that can be caught here include pout, whiting, bream, school bass, rays, sole, stingray and smoothounds.