Fishing Tails > All Articles > Reports > South Devon > South Hams is the Plaice to be!
Smoothounds and Rays Hounds Abound 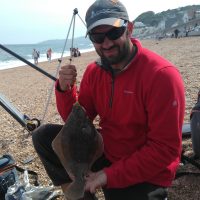 South Hams is the Plaice to be!

Well it’s been a while since I wrote an article this is due to some personal problems which have stopped me getting out, but things have settled down now and I’ve been able to get out fishing.

I’ve concentrated my efforts on the South Hams area of Devon as it has been fishing very well lately, particularly the beaches. There have been a lot of plaice being caught also a lot of Rays have been making an appearance.

Mackerel are everywhere at the moment with the top marks in Torbay being Berry Head and Hopes Nose, but be warned these marks can become very busy and I must touch on the fact that they are often left like rubbish dumps by inconsiderate people that leave allsorts down there.

If you are fishing on the bottom at either of these marks it can be impossible during the day so night fishing is essential but the rewards can be worth it especially at Hopes Nose where you should start to pick up the Smooth hounds and Thornbacks now, but it is one of those marks that can throw up anything really. Fishing off the high ground at distance can produce specimen plaice on the right day and is well worth ago.

Both of these deep water rock marks will also produce Pollack and have been known to produce a few doubles.

Going back to the South hams,  Slapton, Beesands and East portlemouth are all producing Plaice, Bass and Rays.

The best time to fish is over low water, I have found that the first two hours of the flood tide seem to produce the best plaice fishing but they can be gone as soon as they are there so make sure you have a few rigs baited and ready to go. Ragworm is the top bait but lug is a great alternative.

As many other places the spider crabs are here in force! Snipping of hooks from traces cast after cast.

If using fish baits then I would check them fairly often as they may not be there anymore.

On the few times I have been out I have managed a few nice plaice and a couple of Thornbacks from the estuaries and of course lots of Dogfish, I must say though that on nights when not much is about they keep the Rods Knocking.

Around Brixham there are plenty of Rock marks and it is well worth trying for a conger at night especially from the Breakwater. You will also pick up Bull Huss and Specimen Rockling all falling to Mackerel baits fresh is better but frozen works well.

My plans for the next few weeks involve a trip to a Bristol Channel mark and  trips to Chesil , locally I will be concentrating on Rough ground marks looking for the Huss and Conger so hopefully I will have a lot more to report on.