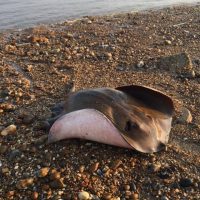 Since my last update things have picked up quite a lot! I have heard reports of some awesome fishing all along the Essex coast The weather hasn’t been that  great for this time of year but it does not seem to have affected catches too much. What has got in the way is the mayweed,  which has been shocking this year in Essex. Thankfully it’s starting to die off now leaving us to deal with the usual quota of seaweed.

Walton on the Naze:

Thornback rays are still being caught from the pier in good numbers and this, in turn, is attracting fishermen from all over the county and beyond, who fancy a piece of the action! Walton is a fantastic place to visit with plenty of attractions for all the family including the pier itself. I recommend you visit Meta-Tackle for your bait and tackle needs. its owner Richard is very helpful and is a font of invaluable local knowledge. I think it’s  important that we all try to support our local tackle shops, as in this internet age, its all to easy to take them for granted until they are gone!

A 10lb female thornback caught on a large bluey bait.

I tried to fish this venue a few times this week but the weed was absolutely terrible and I just couldn’t cope with the amount of  line and tackle I was losing. Those that did manage to avoid the worst of the weed were rewarded for their perseverance. If this double header of Bass and what looks like a Turbot, is a sign of things to come we are in for a good summer.

Now things start to get a little bit special!  This beach is being mobbed with anglers from all over the country all hoping to land an elusive Stingray! Many have tried  but only few have been lucky, so hats off to Matt Clark who battled for over twenty minutes to land this beautiful Stingray caught on a big king rag bait. The exact weight of the fish is not known but it’s estimated to be around 60+lbs.

Matt wasn’t the only one to have caught one of these amazing creatures and angler Russel Cole was also lucky enough to landed himself one on a Squid and rag cocktail. Again the exact weight is not known but estimated around the 50lb mark. Well done guys.

If you feel there is anything I have missed or you would like to add to the next post on fishing tales please do get in touch with me either via Facebook (East Coast Fishing Reports page)  or simply leave a message on this post.