Fishing Tails > All Articles > Reports > Chesil Beach > Tuna found in the Fleet
Blue Shark fishing Why was I away camping, when I should have been fishing? 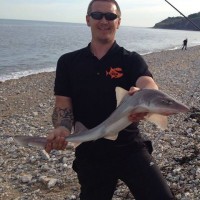 Tuna found in the Fleet

A dead Tuna thought to weigh around 30lb has been found up the Fleet. No its not a wind up, and the report is a bit late, as my spam filtered had removed the email that was sent to me over a week ago.

The fish was found by Mark Beech, whilst walking his dogs near Moonfleet. Although looking worse for the wear, it can clearly be seen that it is a Tuna, although I have no idea which species. Mark told me that it measured over a metre and had been dead for at least 24 hours. We have no way of knowing how the fish ended up there, but it does open the mind to exciting possibilities.

For all you fresh water fishermen out there, I have just been sent the following press release from the Environment Agency:

Environment Agency enforcement teams continue clamping down on rod licence cheats, notching up more than 13,000 licence checks across England in May.

Of the 13,000 anglers checked for a valid licence, 965 were fishing illegally and could face a court appearance and a substantial fine. A recent penalty was more than £800 when an annual licence costs just £27.

May falls within the coarse fishing ‘close season’ – which runs from 15th March to 15th June – when coarse angling is suspended on rivers and a few canals and lakes in order to allow coarse fish to breed. While some licence cheats were also fishing rivers during the close season, the majority were caught on stillwaters where fishing is still allowed during these months.

One Environment Agency enforcement officer reported an angler for fishing with three rods on one licence (each licence covers up to two rods). The angler was particularly aggressive because he had been caught in same place for the same offence last year.

In another case an angler gave a false identity and nearly ended up being arrested. The following day the same angler was checked at a different fishery but had subsequently bought two valid rod licences. What’s more, he was fishing with several other anglers and had informed them that the bailiffs were about – his fellow anglers told the officer they had been tempted to fish without a licence but, on the advice of their friend, had bought one that morning online.

Sarah Chare, head of fisheries at the Environment Agency, said: “The number of anglers caught red-handed is testament to the hard work of our enforcement teams. But worryingly it still shows a blatant disregard for fisheries and the environment. People who don’t buy a licence are cheating other anglers and the future of the sport. The Environment Agency relies on the income from rod licences to continue the important work we do to protect fish stocks, improve fisheries and encourage more people to take up fishing.

“If you are caught fishing without a rod licence you risk a criminal conviction and a fine. There is no excuse – it costs just £27 for a whole year and is easy to buy from the Post Office website.”

In addition to the Environment Agency’s rod licence enforcement work, which focused mainly on stillwaters, Angling Trust voluntary bailiffs were also patrolling rivers to detect and report any close season and other fisheries offences. Environment Agency officers were able to respond to their reports and all the intelligence information gathered will help inform future enforcement patrols – they will know who is likely to be fishing illegally when and where.

Money raised from rod licence sales is reinvested in the environment, including a whole range of projects to improve facilities for anglers, protect stocks from illegal fishing, plus fish restocking, invasive species eradication, and working with partners to encourage people to take-up fishing for the first time.

Annual rod licences for trout and coarse fishing remain at £5 for 12 to 16 year olds, £18 for senior and disabled concessions and £27 for non-concessions. Children under 12 can fish for free. Buying a licence online from the Post Office website saves time and administration costs, which means more of the income can be spent on improving fish stocks and fishing.

Now that we have got that important bit of information out of the way, lets get back to hearing what has been caught recently. Andy Fish, one of the owners of Chesil Bait n Tackle managed a rare trip out yesterday on his friends boat and he landed a lovely Blonde Ray.

I was talking to one of the Bass fishermen earlier in the week and he showed me a picture of an 8lb John Dory he had on live Sandeel whilst Bassing. I will try and get the picture from him the next time I see him.

Chesil Beach: Slight chop with a milky tinge to the water.

Chesil Beach forecast: Looks like we could be in for a good weekend of fishing on Chesil, but then I think I say that every weekend. We have a bit of a stiff wind forcast for the next 32 hours, which will stir the beach up a bit, but come Sunday, it will be calm again. Expect plenty of mackerel. Bream and Gurnard are coming from the area around Ferrybridge. Garfish and Scad are starting to feature amongst catches, with float fishing the best method for both species.

Portland: With a bit of a swell and a decent tide, there is always the chance of a Bass close in amongst the rocks on Portland. Chesil Cove often produces a decent fish at this time of year. You could opt to fish with lures, or use a large flapper of Mackerel or whole Squid. You don’t need to cast out far, but do expect to lose some gear.

If you want an almost guaranteed catch, then go for a Wrasse. The Island has fished very well for Wrasse so far this season. The usual marks like Church Ope and the Bill are fairly easy to access. Just be careful of the swell.

Portland Harbour: I expect it to be fairly quiet in the harbour until the tides pick up again next week.

Weymouth Bay: I fished Stone Pier yesterday with some clients who had never caught a fish before and were complete novices. It was great to see them enjoying themselves with a fish almost every cast. Most of them were Wrasse, but there are plenty of Small Bream around the pier walls. If you want to try with a strip of float fished Mackerel, you will be in with a good chance of Mackerel, Pollock and Garfish.

Lyme Regis: Smaller tides normally mean better fishing in Lyme Regis and Monmouth Beach. With two competitions fished this week, the reports are that there are plenty of fish around, but not the normal ones we come to expect. Very few Dogfish, Pout or Bull Huss were landed. But there was a number of Smoothoud and even a Golden Grey Mullet.

SUBSCRIBE
Blue Shark fishing Why was I away camping, when I should have been fishing?

4 Responses to "Tuna found in the Fleet"